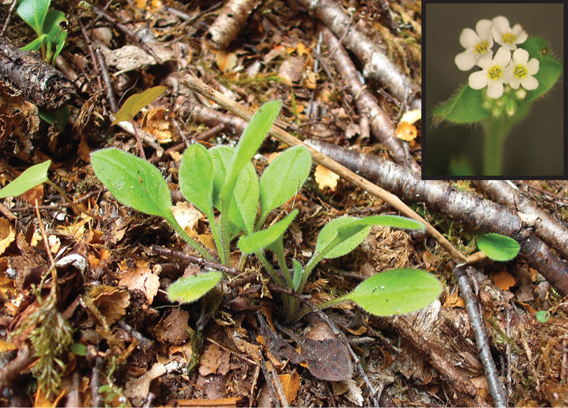 The new species, Moore’s forget-me-not (Myosotis mooreana) is known from only a single location. Photo by: Lehnebach et al.

New Zealand scientists have discovered two new species of forget-me-nots (flowers in the genus Myosotis), both of which are believed to be endangered. Discovered in Kahurangi National Park on the South Island, the new species highlight the diversity of the tiny flowers in New Zealand.

“New Zealand forget-me-nots are far different from their blue flower relatives commonly found in people’s gardens, and some native species have yellow, pink, or tube-like brown-bronze flower,” the discoverer, Carlos A. Lehnebach, said in a press release. “New Zealand is also home to the smallest forget-me-not in the world!”

In all, 39 species of Mythosis are found in New Zealand. Their are numerous legends surrounding the name ‘forget-me-nots,’ which originated in France in the late Middle Ages.

(06/15/2012) Carnivorous pitcher plants get an assist from Mother Nature in capturing their insect prey, according to a study published in PLoS ONE.

(03/14/2012) The world may soon benefit from a plant long-used by indigenous people in the Peruvian Amazon for toothaches, eliminating the need for local injections in some cases. Researchers have created a medicinal gel from a plant known commonly as spilanthes extract (Acmella Oleracea), which could become a fully natural alternative to current anesthetics and may even have a wide-range of applications beyond dental care.