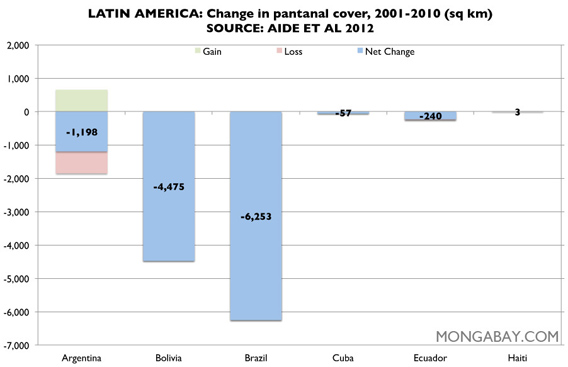 Flooded grasslands and savannas in Latin America are disappearing nearly three times faster than tropical rainforests in the region, finds a new study published in the journal Biotropica.

The research, led by Mitchell Aide of the University of Puerto Rico, used NASA satellite data to assess change in woody vegetation cover across 16,000 municipalities in Latin America and the Caribbean. It found that flooded grasslands and savannas — termed the “pantanal” biome &#8212 declined 5.3 percent from 229,696 sq km in 2001 to 217,476 sq km in 2010. By comparison, moist forests in the region declined 1.9 percent from 9.52 million sq km to 9.34 million sq km.

The authors conclude that expansion of export-oriented agriculture is the dominant driver of land use change in the region. Brazil lost the largest area of the pantanal biome, losing 6,253 sq km. Bolivia and Argentina followed with 4,475 sq km and 1,198 sq km respectively. In Brazil and Argentina, both cattle ranching and nature-based tourism in the Pantanal are a major economic activities.

Brazil in 2009 moved to slow industrial agricultural expansion in the Pantanal by restricting new sugarcane plantations. Nevertheless there is fear among environmentalists that planned infrastructure projects, including ports and channelization, could dramatically alter the Pantanal ecosystem in coming years. The Pantanal in Brazil

The largest and best-known extent of pantanal is located in the border region of Brazil, Paraguay, and Bolivia. That area of wetland is home to some 3500 species of plant, 650 species of birds, at least 125 types of mammals, 180 kinds of reptiles, 41 amphibian species, and 325 species of fish. However small areas of similar wetlands can also be found in other parts of South America and the Caribbean.