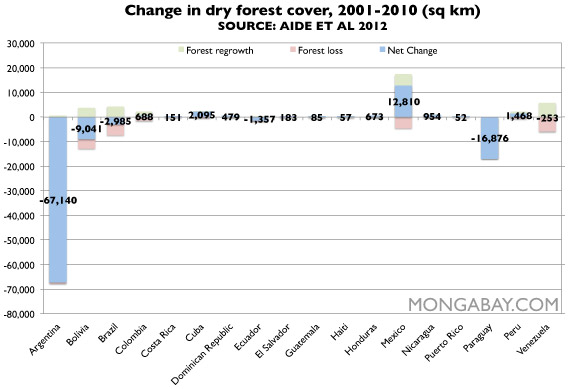 Countries across Latin America lost 78,000 square kilometers of subtropical and tropical dry broadleaf forests between 2001 and 2010, according to a new satellite-based assessment [PDF] published in the journal Biotropica.

The research — based on analysis of data from the MODIS sensor on NASA satellites — looked at vegetation change in ten biomes across 16,000 municipalities in Latin America and the Caribbean. It found that dry forest cover fell from 2.03 million sq km in 2001 to 1.95 million in 2010, or 3.8 percent during the period. By comparison, moist forests — popularly lumped together as “rainforests” — declined 1.9 percent from 9.52 million sq km to 9.34 million sq km.

Dry forest loss was concentrated in Argentina (loss of 67,140 sq km), Paraguay (16,876 sq km), Bolivia (9,041 sq km), and Brazil (2,985 sq km) where industrial soybean agriculture and cattle ranching were fast-expanding. The Chaco ecosystem suffered the brunt of forest clearing as well as forest fragmentation. The authors note that conversion of the dry forest for agriculture and pasture “represents a major loss” in carbon stocks.

But not all countries experienced forest loss. Mexico gained 12,810 sq km of dry forest, while Cuba saw recovery of 2,095 sq km of the biome. The authors observed forest recovery in areas that are often too dry to farm, suggesting agricultural abandonment of those lands. Mexico also has a system of community-managed forests known as ejidos which may have helped facilitate recovery in some areas.

Overall the study found Latin America experienced a gross loss of 542,000 sq km of woody vegetation cover during the period. That loss was partly offset by a net gain of 362,000 sq km.

The research was led by Mitchell Aide of the University of Puerto Rico.

(09/26/2011) Tropical dry forests have received little conservation and research attention as compared to their rainforest cousins, leaving these ecosystems to become gravely threatened while still largely unknown to the public and scientists. A new study in mongabay.com’s open access journal finds that Caatinga, a seasonally dry tropical forest, is the least-known forest in Brazil.

(04/12/2011) The destruction of 3,600 hectares (8,900 acres) of the Gran Chaco forest in Paraguay by large Brazilian cattle ranching companies has led to a legal complaint filed by a local indigenous-rights organization, since the land in question was one of the last refuges of a group of uncontacted indigenous people in the Ayoreo-Totobiegosode tribe. The loss of the forest was revealed in part by satellite images of the remote area.

(11/15/2010) A joint expedition by the Natural History Museum (NHM), London and the Natural History Museum, Asuncion to the dwindling dry forest of the Gran Chaco in Paraguay to record biodiversity, and hopefully uncover ‘hundreds’ of new species, has been suspended by the Paraguayan government. The suspension comes after a local organization voiced concern that the expedition would threaten uncontacted member of the Ayoreo tribe in the forest.