Migrating Whimbrels — a type of shorebird — may struggle for hours against winds when trying to cross the Caribbean during hurricane season but get a huge boost as they fly out of storms, report researchers from the Center for Conservation Biology in Williamsburg, Virginia.

Ahead of a large tropical storm last year scientists attached satellite transmitters to one Whimbrel, which they named “Hope”. A statement from the American Bird Conservancy explains what they found.

“She took 27 hours averaging just 9 mph to fly non-stop through the storm to get to the center; then she flew at an average of almost 100 mph for 1.5 hours out the back end, using the power of the storm to ‘slingshot’ her towards land.”

“In addition to the simply staggering distances these birds travel – often thousands of miles at a time, nonstop – we are also observing what could be described as jaw dropping physical feats involving storms,” he said in a press release. “These herculean efforts leave the birds exhausted and in need of a safe haven to rest and refuel. Unfortunately there are few of these locations in the Lesser Antilles.”

The American Bird Conservancy (ABC) is using the findings to underline the dangers faced by birds in some parts of the Caribbean, including Guadeloupe, Martinique, Barbados, French Guiana, Suriname and Guyana, where hunting is largely unregulated, according to the group. ABC notes that two of the birds Smith’s team was tracking were killed last year.

Some locals gather at recreational shooting swamps in the Caribbean to slaughter with impunity everything that flies by. They claimed perhaps their most notable bird victims last year: two Whimbrels named Machi and Goshen that were being tracked by Smith’s team. Over a lifetime Machi is estimated to have flown 27,000 migration miles and made it through Tropical Storm Maria; Goshen had flown 14,000 miles including several hours battling Hurricane Irene. Forced to land in Guadalupe, an area they had avoided in previous recorded migrations, they were then killed by the unregulated hunters. 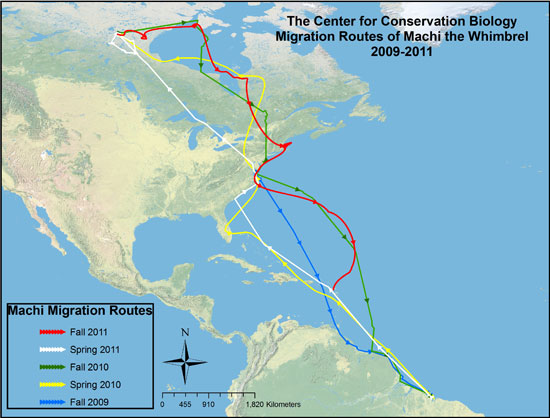 Migration routes of Machi, the Whimbrels that was killed last year. Map courtesy of the Center for Conservation Biology

ABC is calling upon the French Ministry of Ecology to put a stop to “unregulated and unmonitored shooting” on the island of Guadeloupe, which is under the jurisdiction of France.

“This mass slaughter of birds has to stop,” said Dr. George Fenwick, President of American Bird Conservancy. “These shooting parties are the antithesis of everything the hunting community stands for here in the U.S. They don’t care about the impact they have on the environment, give nothing back in the way of permit fees to promote conservation efforts, and sometimes don’t even bother to collect the birds they shoot.”

ABC notes that beyond hunting, shorebirds face other threats, including loss of wetlands and mangrove forests due to urban expansion, agricultural development, and resort construction.