Struggling to conserve seed biodiversity: the gaps and wisdom in current research

Biodiversity conservation is huge field, but at its heart we find something very small: the seed. From seeds come the plants we need and food for the animals we hope to conserve as well. Knowledge of seed dispersal, or how seeds are generated and move through the landscape, is essential if we are to understand the influence of human activity on biodiversity.

What do we know and what do we not know? To answer these questions, Kim McConkey and colleagues, including researchers from India, Singapore, Malaysia, and Spain, reviewed research published since 2000. They sought to determine what advice should be given to conservationists. At present, advice that might help isn’t often shared in a way that affects outcomes, so they performed this review to widen channels of communication.

Their review looked at the four causes of changing biodiversity and what is known about how seeds interact with each of them. They are (a) fragmenting plant and animal habitat, (b) overharvesting of plants and animals, (c) invasive species crowding out native plants and animals, and (d) changing climate. Their review concluded that seed dispersal research needs to be done at larger scales and in more varied landscapes that reflect real terrain, since research often encompasses only a small, homogenous space. Research should also account for all four key drivers of biodiversity change. It is important, the review stated, for scientists to know how those drivers affect seed dispersal and what happens when more than one is present. As scientists develop more comprehensive methods, current research offers insight for both future research questions and conservation decisions.

Here’s a summary of that insight:

Habitat fragmentation: When humans develop landscapes, they break up habitat that is home to native plants and animals. To assist flora and fauna populations to continue to exist there, it is necessary to enable them to move between the newly isolated remnants of habitat. To help species persist, they recommend linking habitat fragments with strips that will support the species. At the very least, habitat “stepping-stones” should be established.

Overharvesting: Though animals harvest seeds, they also help spread them. Thus, overhunting animals can be just as detrimental to seed dispersal as harvesting the seeds directly. Plant and animal populations should both be monitored to maintain seed biodiversity. For those species essential for seed dispersal, the authors suggest managing for “a population size that maintains their ecological function, rather than merely the minimum viable population.” In lay terms, don’t keep a population alive just so humans know what it looks like, enable its survival at a level that makes it an important part of an ecosystem.

Invasive species: Invasive plants compete with native flora for habitat and also to make use of local animals as seed dispersers. Conversely, invasive animals compete with native fauna for habitat and, as seed dispersers, may or may not spread the seeds of native plants. It is difficult to generalize about how to control invasive species but the review suggests that a good first step is a comprehensive assessment of the traits of plants and animals as they relate to seed dispersal.

Climate change: A changing climate means the habitat where a plant now exists may not remain suitable in the near future. Animals are following changing temperature boundaries, but plants, unless they hitch a ride with animals, as some do, are not keeping up. Keeping increasingly isolated habitats connected, as noted, will be important if seeds are to be enabled to relocate as the climate around them changes. For some plant species, conservationists should be prepared to assist their migration. 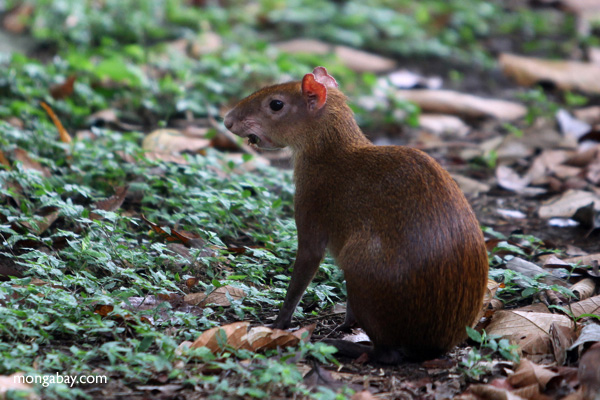 An agouti, an important seed disperser in Latin America.

In an attempt to isolate variables, research often fails to offer conclusions that apply to real-world scenarios. For future research on seed dispersal as it relates to biodiversity conservation, the review’s primary advice is: “Seed dispersal ecologists need to expand their field of view in order to study how seeds move — or fail to move — across real (fragmented, heterogeneous) landscapes on scales (kilometers) that matter for the long-term survival of plant and animal diversity in a changing world.”

Emily Eggleston is a graduate student at the University of Wisconsin – Madison. She completed a geography master’s degree in May 2012 and in the midst of a second master’s program in journalism. She has topical footholds in soil science, sustainable agriculture, and people-environment relationships.