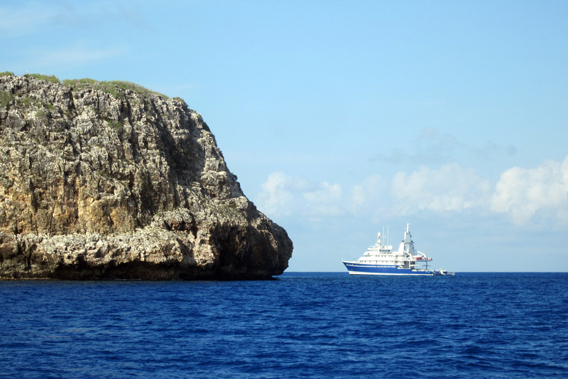 A ship approaches the Caribbean Island of Navassa. Photo by: Eddie Gonzalez.

Don’t feel bad if you‘ve never heard of Navassa Island, even though it’s actually part of the U.S. according to the Guano Islands Act of 1856. This uninhabited speck between Haiti and Jamaica, barely bigger than New York City’s Central Park, has a bizarre and bloody history—and may be a crucial refuge for endangered coral in the Caribbean.

Navassa has been underwhelming visitors since 1504, when crewmen sent by Columbus arrived and promptly died from drinking contaminated water. An American sea captain claimed the mesa-shaped islet for the U.S. in 1857 for its rich deposits of bird excrement, used to make fertilizer and gunpowder. Over the next three decades, African-American workers living in virtual slavery mined over a million tons of fossilized guano by hand (which the Navassa Phosphate Company of Baltimore shipped out on the S.S. Romance). In 1889, the workers rose up and killed five supervisors, sparking a legal battle over possession of the island that went all the way to the U.S. Supreme Court. The island and its animal inhabitants—mostly lizards and feral dogs today—were abandoned in 1898 after the Spanish-American War.

Haiti still claims Navassa in its constitution, but the U.S. Fish and Wildlife Service declared it a National Wildlife Refuge in 1999. Only researchers can drop anchor there today, but the interesting part is underwater anyway. This March and April, scientists with the Global Reef Expedition, a 5-year worldwide coral survey sponsored by the Khaled bin Sultan Living Oceans Foundation, made 212 data-gathering dives on Navassa’s reefs. They found a surprisingly rich coral ecosystem that has escaped much of the damage that overfishing, pollution and climate change have wrought on other reefs in the region.

While Navassa’s reefs have suffered from mass bleaching events and outbreaks of disease over the past decade, the team found virtually no evidence of either during their surveys, says Andrew Bruckner, the foundation’s chief scientist. “The overall condition of the remaining coral colonies was very good, and there has been an increase of some types of faster-growing corals.”

There was still some cause for concern: macroalgae (seaweed), which can crowd out growing coral, was plentiful, while large colonies of living coral were still rare. In addition the researchers recorded few large, ecologically important fish, likely due to pressure from impoverished Haitian fishermen, and saw lionfish, a voracious and quickly spreading invasive species, on almost every dive. Overall, though, Navassa’s coral cover has increased since the last survey in 2008, and many of the coral colonies that were affected by bleaching and disease have started to grow back.

The most encouraging discovery was an abundance of endangered elkhorn coral (Acropora palmata), whose populations have collapsed by as much as 98% throughout its range since 1980. The shallow-water coral typically grows in stands with treelike trunks and branches up to 6 feet long (hence the name). At Navassa, though, elkhorn has adapted to the island’s near-vertical underwater walls by growing in an unusual encrusting form that clings to cliffs and ledges.

This odd shape may help make the island a kind of genetic refuge. Coral can reproduce either sexually, by releasing gametes into the water, or asexually, when small pieces break off and grow into new colonies that are genetically identical clones. On Navassa’s underwater walls, any elkhorn “horns” that break off usually end up in water that’s too deep for them to take root, which limits the colonies to sexual reproduction. This unique situation gives the coral a high genetic diversity and a greater resistance to disease and the effects of climate change, including higher water temperatures and CO2 levels.

“If this genotypically diverse population could provide offspring for surrounding islands like Jamaica and Cuba, then it could offer hope that depleted populations in surrounding areas could be replenished,” says Dana Williams of the University of Miami, one of the expedition scientists.

As coral ecosystems around the world hover on the brink of collapse, any sort of haven—even one as remote and odd as this—is more than welcome.

In 2011 and 2012, the expedition surveyed reefs in the Bahamas, St Kitts & Nevis, Jamaica, Navassa, Colombia and the Galapagos Islands. The goal is to survey and map remote coral reefs, often for countries who can’t afford to do it themselves, to help identify high-priority sites for protection. At each site, local scientists team up with researchers employed by the foundation, which assumes all the costs. All data and maps are turned over to the host countries at the end of each mission. The 220-foot research vessel Golden Shadow is now en route to the South Pacific, and will work its way west around the globe until 2016. 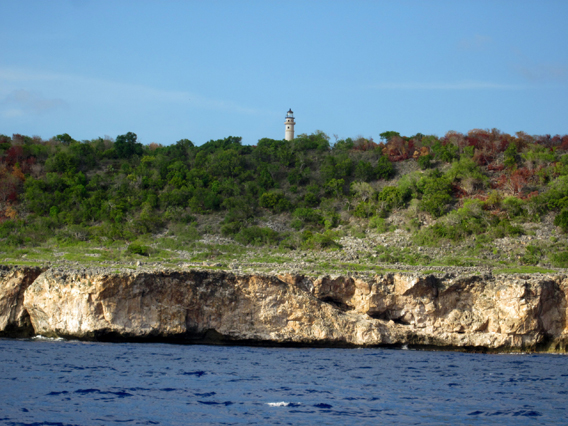 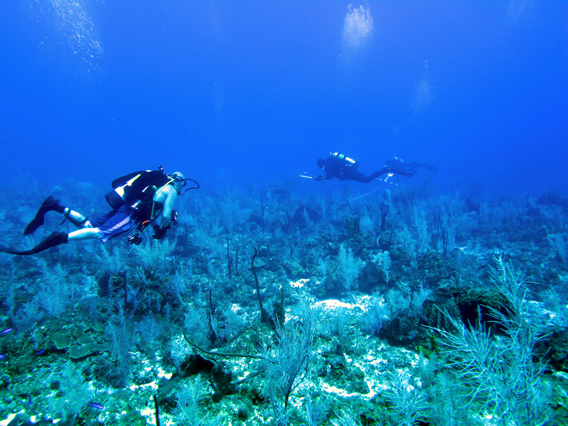 Julian is a science and travel writer based in Portland, OR. His most recent book is “Crossing the Heart of Africa: An Odyssey of Love and Adventure”.