NASA satellites picked up extensive signals of potential deforestation across large parts of the tropics between April 1 and June 30, according to the latest update on Mongabay.com’s Global Forest Disturbance Alert System (GloF-DAS).

The GloF-DAS relies on NASA’s Moderate Resolution Imaging Spectroradiometer (MODIS) sensor to detect changes in forest greenness cover relative to the year-earlier period. It registers change when more than 40 percent of a five by five kilometer surrounding forest area has lost greenness over the previous 12 months. Seasonal variation is generally mitigated through the product’s quarterly baseline, although changes in some parts of the world, like boreal regions, can be affected by snow and ice distribution.

The tool can help highlight areas where deforestation and forest degradation is occurring on a quarterly basis, potentially providing insight to policymakers, civil society, local communities, and academics. 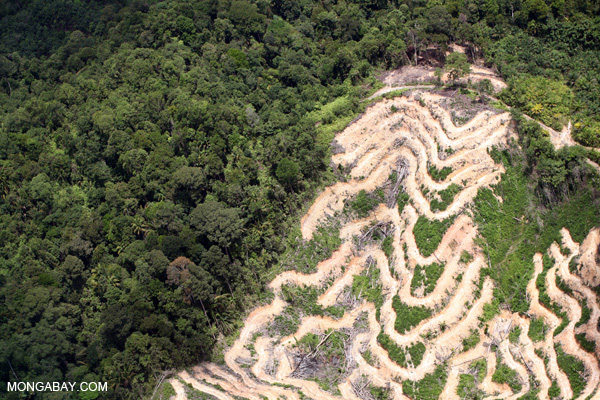 Deforestation for palm oil in Borneo

GloF-DAS data is now downloadable for use in maps and other applications.

(05/30/2012) Mongabay.com is pleased to announce the beta version of a global forest disturbance alert system (GloF-DAS) developed in partnership with Cal State Monterey Bay and NASA Ames Research Center. The tool offers the potential to pinpoint areas that are being deforested on a quarterly basis.