Efforts to rapidly and accurately track deforestation and forest degradation in Indonesia, Brazil, Mexico, and Peru got a boost this week with a special technical training session organized by the Governors’ Climate and Forests Task Force (GCF).

The meeting, convened at Stanford University and Google’s Silicon Valley campus, paired staffers from government agencies and NGOs in the four tropical countries with technical experts from the Amazon Environmental Research Institute (IPAM), the Carnegie Institution for Science, the Forum on Readiness for REDD, Woods Hole Research Center, and Google Earth Outreach. The participants received training to augment existing deforestation, forest degradation and biomass monitoring capabilities, which are highly variable both between countries and within sub-national agencies and jurisdictions.

The week-long exercise aims to improve measurement, reporting and verification (MRV) systems for the reducing emissions from deforestation and forest degradation (REDD+) program being advanced by the GCF, a collaborative effort among 17 states from Brazil, Indonesia, Nigeria, Peru and the US to develop the capabilities necessary to generate “compliance-grade forest assets” for reducing deforestation and degradation. The GCF is working to establish rules and safeguards to ensure REDD+ projects actually reduce emissions without causing adverse social and environmental impacts feared by critics of the concept. 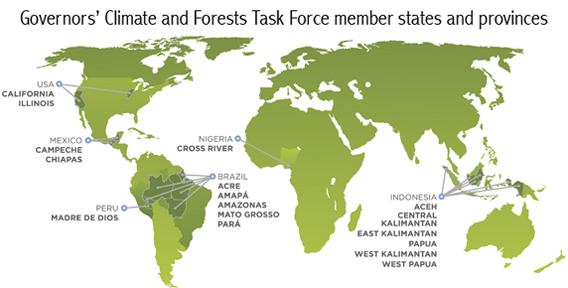 “Our goal with CLASlite is to support tropical nations in their effort to routinely map deforestation and degradation on their computers,” said Greg Asner, the Carnegie Institution ecologist who leads the CLASlite project. “There should be no ‘experts-only’ barrier for MRV.”

Asner noted that more than 180 organizations have been trained to use CLASlite in the Andes-to-Amazon region and elsewhere. John Clark, also of the Carnegie Institution, added that the governments of Colombia and Peru have already expanded their capabilities for large-scale deforestation and degradation mapping using CLASlite.

Alessandro Baccini and Greg Fiske of the Woods Hole Research Center explained how to convert deforestation and degradation data to emissions estimates using detailed biomass maps. They highlighted the importance of good biomass maps, and that early efforts to estimate emissions from deforestation have been inaccurate because of poor underlying biomass data.

The meeting closes with a brief visit to Google to highlight its Earth Engine, which will help users find the global satellite data that goes into CLASlite. By harnessing its massive computing cloud, Earth Engine was used in 2010 to create a detailed forest cover and water map of Mexico in less than a day, a feat that would have taken three years using a single computer.

Co-organizer Claudia Stickler of IPAM told mongabay.com the training should enhance the ability of GCF-participating states and provinces to accurately and effectively monitor their forests.

“While progress at the international level has been slow in developing MRV systems, developing states and provinces are moving ahead with their own forest monitoring programs,” said Stickler. “Tools like CLASlite can support this effort, improving accuracy of emissions estimates and boosting local technical capacity to reduce emissions from deforestation and degradation.”

(06/20/2012) A system providing monthly alerts on deforestation and forest degradation in the Brazilian Amazon will soon be generated on the Google Earth platform Engine, reducing the time it takes to process and disseminate data, reports Imazon, the Brazilian NGO that developed the Alert System of Deforestation (SAD).

(01/30/2012) Tropical rainforests store some 229 billion tons of carbon in their vegetation — about 20 percent more than previously estimated — finds a new satellite-based assessment published in the journal Nature Climate Change. The findings could help improve the accuracy of reporting CO2 emissions reductions under the proposed REDD program, which aims to compensate tropical countries for cutting deforestation, forest degradation, and peatlands destruction.