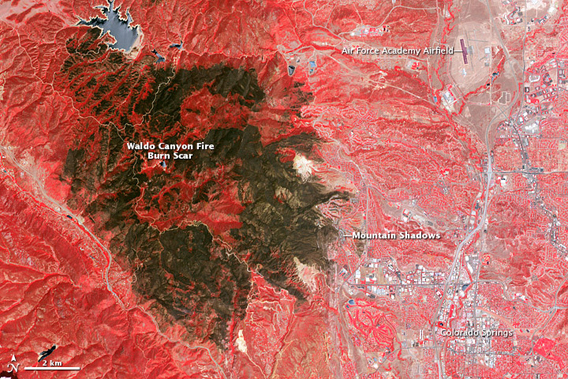 According to new data from the National Oceanic and Atmospheric Administration (NOAA)’s National Climatic Data Center, the last twelve months have been the warmest on record for the contiguous United States. This record, set between July 2011 through June 2012, beat the last consecutive twelve month record set only a month earlier between June 2011 and May 2012, which in turn beat the previous record holder, you guessed it: May 2011 through April 2012.

June 2012, according to the NOAA, was the 14th warmest on record, but followed the warmest spring yet recorded in the U.S. IN addition, a heatwave at the very end of June shattered records across the country, including many set during the Dust Bowl. Two states, South Carolina and Georgia, may have even beat their all time warmest temperatures, an anomaly in June. In addition over half of the U.S. (56 percent) was under drought conditions. This is the largest percentage of drought recorded in the U.S. since monitoring began 12 years ago. Devastating and massive fires also swept through the Southwest, including the biggest fire ever in New Mexico and Colorado’s two most destructive fires ever: the High Park Fire and Waldo Canyon Fire, which killed two people and destroyed 350 homes. The landmark heatwave, drought, and natural disasters, have pushed many in the media, as well as a number of researchers, to connect the dots between these bizarre records and global climate change.

“Many people around the world are beginning to appreciate that climate change is under way, that it’s having consequences that are playing out in real time and, in the United States at least, we are seeing more and more examples of extreme weather and extreme climate-related events,” the chief of NOAA Jane Lubchenco recently said in a speech in Australia. “People’s perceptions in the United States at least are in many cases beginning to change as they experience something first-hand that they at least think is directly attributable to climate change.”

Since the U.S. makes up only two percent of the world’s land surface, it shouldn’t be seen as a proxy for global trends. However, as the world warms due to climate change, the U.S. can hardly escape its many predicted impacts. Scientists have long warned that climate change will increase the odds, and in some cases boost the ferocity, of extreme weather events like heatwaves, droughts, floods, and wildfires. In fact, a study released this week found that climate change made the devastating drought in Texas last year 20 times more likely. With time, researchers will also most likely tease out if climate change boosted the probability of the U.S.’s current heatwave.

(06/18/2012) Last month was the second warmest May since record-keeping of global temperatures began 132 years ago. Globally, temperatures were 0.66 degrees Celsius (1.19 Fahrenheit) above the 20th Century Average and were only topped by May 2010, according to preliminary findings by the National Oceanic and Atmospheric Administration (NOAA).

(05/21/2012) La Nina conditions, which generally bring colder temperatures to many parts of the world, ended last month resulting in the fifth warmest April since record-keeping began, and the hottest April yet in the terrestrial Northern Hemisphere, according to the National Oceanic and Atmospheric Administration (NOAA).