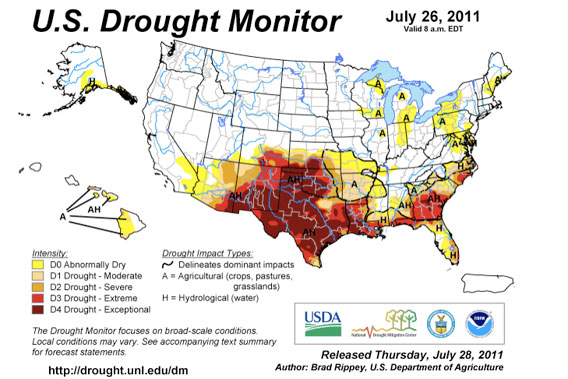 Map shows the level of drought and dryness across the US in July 2011. Map courtesy US Department of Agriculture. Click to enlarge.

Climate change is here and its increasing the chances for crazy weather, according to scientists. A prestigious group of climatologists have released a landmark report that makes the dramatic point that climate change is impacting our weather systems—and in turn our food crops, our economies, and even our lives—here-and-now. The new report in the American Meteorological Society is first of what is intended to be an annual offering that will attempt to tease out the connections between climate change and individual extreme weather events, such as heatwaves, droughts and floods.

“2011 will be remembered as a year of extreme events, both in the United States and around the world,” Kathryn D. Sullivan, deputy administrator with the National Oceanic and Atmospheric Association, said in a press release. “Every weather event that happens now takes place in the context of a changing global environment.”

For example, researchers found that climate change made last year’s devastating drought in Texas 20 times more likely than such an event would have been just fifty years ago.

“We found that extreme heat events were roughly 20 times more likely in 2008 than in other La Niña years in the 1960s and indications of an increase in frequency of low seasonal precipitation totals,” the researchers write, who used 2008 as a proxy for 2011 given data availability.

The Texas drought dried up water sources, decimated crops, forced ranchers to cull cattle herds, and killed hundreds of millions of trees. The state lost an estimated $7.62 billion in the cattle and agricultural industries.

“This does not mean that climate change can be blamed for every extreme weather or climate event. After all, there has always been extreme weather,” the scientists write. For example in analyzing an epic flood in Thailand last year, the researchers found no significant link to climate change, noting that “the amount of rain that fell in the catchment area was not very unusual.” Instead they say other hydrological factors played a more important role than a warmer world in that particular extreme weather event.

Still, the overall take-away from the report is that climate change is here, and it’s playing a significant role in disasters around the world.

In fact, arguably the most shocking finding in the report is the likely connection between climate change and drought in East Africa last year. Exacerbated by conflict and government instability, the drought propelled Somalia into famine conditions. Between 50,000 and 100,000 people, half of whom were likely children under five, died in the famine.

“While many nonclimatic factors contributed to this crisis (high global food prices, political instability, and chronic poverty, among others) failed rains […] played a critical role,” the scientists write.

They argue that a 0.7 degrees Celsius rise in sea surface temperatures in the Pacific and Indian oceans over the last fifty years has increased the probability for droughts and failed rains in the region.

“While La Niña [conditions last year] had a large role to play in the failure of the rains in East Africa, there is evidence that warming in the western Pacific–Indian Ocean warm pool has contributed to an increased frequency of droughts in this region,” the scientists write. Unlike the other analyses, however, the researchers were not ready to put a number on how much climate change has increased the probability of droughts in the region yet.

Still, the researchers add that their findings related to the East Africa drought are significant given the hurdles scientists face in collecting climate observations and modeling in developing countries, which do not have the same resources as industrial nations.

While the science of directly attributing extreme weather events to a warming planet is still young, it holds the potential of truly pinpointing just how rapidly and drastically the world is changing from global warming.

“While much work remains to be done in attribution science, to develop better observational datasets, to improve methodologies, to make further progress in understanding and to assess and improve climate models, the contributions in this article demonstrate the potential that already exists for meaningful assessments,” the scientists write.

To mitigate climate change, greenhouse gas emissions must be cut. Experts have long recommended moving rapidly and aggressively from fossil fuel energy sources to renewables, increasing energy efficiency, and protecting and restoring forests and other carbon-rich ecosystems. Despite decades of meetings with international leaders on the issue, global greenhouse gas emissions continue to rise.

(05/07/2012) On Saturday, people around the world gathered to highlight the varied impacts of climate change on their lives. Organized by 350.org, the global day of action was a call to “connect the dots” between a warming Earth and extreme weather events, such as droughts, floods, and fires among other impacts. Nearly 1,000 events were held worldwide.

(05/03/2012) On Saturday, May 5th vulnerable populations from the United States to Bangladesh will “connect the dots” between devastating extreme weather and climate change in a global day of action organized by 350.org. The nearly 1,000 events occurring in over half of the world’s nations are meant to highlight to governments, media, and the public that climate change is impacting lives through an increase in number and intensity of devastating weather events, such as droughts, heatwaves, and floods.