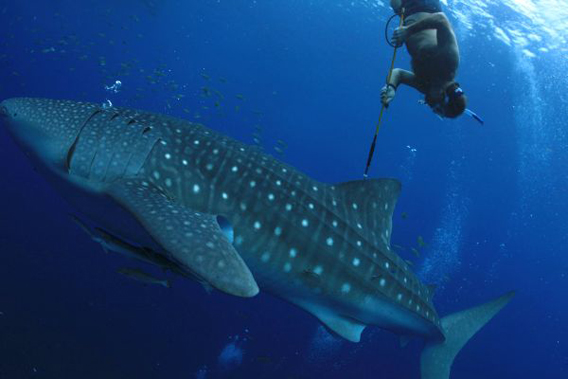 Researchers have a caught a juvenile—though still massive—whale shark on camera sucking fish out of a hole in an Indonesian fishing net. Posted on YouTube.com, the video has gone viral and has been viewed by 1.2 million people to date. The footage was captured during a program to tag 30 whale sharks (Rhincodon typus) in Indonesia’s Cendrawasih Bay National Marine Park in order to learn more about the world’s largest fish.

“These massive fish can grow to nearly 50-feet in length,” explains Greg Stone with Conservation International (CI). “In order to support that massive body, they have to consume tons of plankton or small fish a day. The behavior developed by the sharks in Cenderwasih Bay is a novel a behavioral adaptation to meeting that mark.”

The whale sharks in the area have learned to follow local fishermen for a meal, however this practice can also be dangerous for the giants. Whale sharks sometimes become entrapped in nets and require rescue (as shown in a second video). Conservationists are now working with fishermen to modify the nets’ designs in order to let whale sharks escape.

Indonesian fishermen don’t begrudge the whale sharks their take, according to marine biologist Mark Erdmann: “The bagan fishers in Cendrawasih Bay, as in most areas of Indonesia, regard the whale sharks as good luck and as friends.”

Stone, Ermann, and other researchers are tagging whale sharks in the park with radio-frequency identification tags. This technology allows any future researcher to identify an individual whale shark by scanning them with a receiver wand. The scientists hope the radio transmitters will allow researchers to estimate the population in the area given that the giant fish are easily accessible when they congregate at the fishermen’s nets.

The whale shark is listed as Vulnerable by the IUCN Red List—and in decline—due to ongoing hunting in some countries, though many nations have banned the practice.

Conservation International is working on this program along with WWF-Indonesia, Hubbs Sea World Research Institute and the State University of Papua.

(07/09/2012) The death of one of the world’s largest recorded whale sharks (Rhincodon typus) in the Arabian Sea provoked a sudden global interest in these massive shark. Weighing 14.5 tons, the fish in question made ‘whale shark ‘whale shark’ the number 3 top search in Google Trends on the day the news hit. But, according to a new study in mongabay.com’s open access journal Tropical Conservation Science, more than half the reports filed by journalists were “factually wrong.”