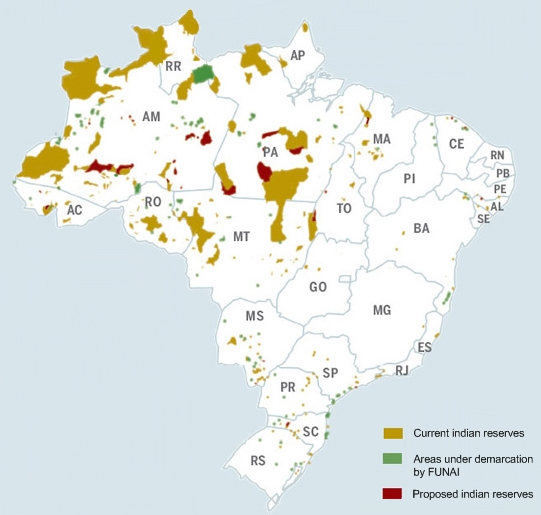 Map of indigenous territories in Brazil as of April 2008. Courtesy of FUNAI

A directive signed Monday by Brazil’s Solicitor-General could hamper the efforts of indigenous tribes to win government recognition of their traditional lands, reports Survival International, a human rights group focused on native peoples.

The directive “opens up all indigenous areas to mineral, dams, roads, military bases and other developments of ‘national interest’ without the need to consult with or address concerns of indigenous peoples”, according to an expert familiar with the directive who asked to remain anonymous. It also restricts demarcation of new indigenous territories.

Survival International called the move “disastrous” citing the plight of the Guarani tribe, some members of which are waiting “in roadside camps or overcrowded reserves” for their ancestral lands to be mapped and allocated.

“This directive puts our survival in extreme danger,” Survival International quoted a Guarani spokesman as saying. “We are being ignored as human beings, as the first occupants of this land. It is the start of the extermination of indigenous people.”

According to the indigenous lands expert reached by mongabay.com, the directive was originally intended to overcome issues in implementing the Raposa/Serra do Sol indigenous area in the northern Brazilian state of Roraima, but the powerful ruralista bloc in Congress pushed to apply the directive to all indigenous areas. The ruralistas also successfully pushed for a weakening of the country’s Forest Code, which mandates how much forest landowners are required to protect, earlier this year. (The final version of the Forest Code is pending).

However outcry over the directive on Wednesday led Brazil’s Public Prosecutors’ Office to suspend the measure pending a court ruling on the issue. Survival International and several Brazilian indigenous organizations have called for the directive to be revoked entirely.

The directive was passed only a month after an association of more than 1,200 tropical scientists convening at the annual meeting of the Association for Tropical Biology and Conservation sounded the alarm on the potential development.

(04/20/2011) Protected areas now cover nearly 44 percent of the Amazon — an area larger than Greenland — but suffer from encroachment and poor management, reports a new study by Imazon and the Instituto Socioambiental (ISA). The report, published in Portuguese, says that by December 2010, protected areas in the Brazilian Amazon amounted to 2,197,485 square kilometers. Conservation units like national parks accounted for just over half the area (50.6 percent), while indigenous territories represented 49.4 percent.