Animal picture of the day: rare image of Asiatic cheetah and cubs 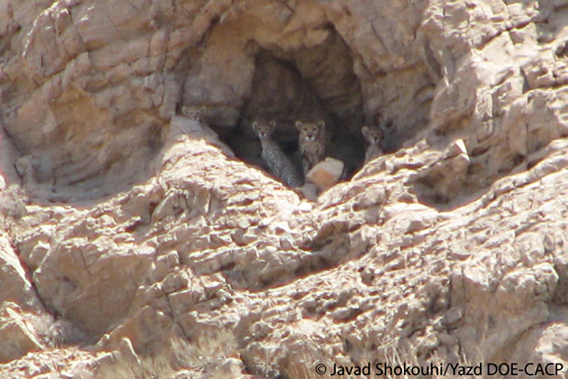 A rare image of a mother Iranian cheetah and its three cubs. Photo by: Javad Shokouhi/Yazd DOE-CACP.

The Asiatic cheetah (Acinonyx jubatus venaticus), also known as the Iranian cheetah, is one the world’s rarest cat subspecies with somewhere between 70-110 individuals left. No surprisingly it is considered Critically Endangered by the IUCN Red List.

“This is a special snapshot of an Asiatic cheetah mother flanked by three cubs in a cave sheltered from the intense Iranian desert sun. This same cheetah mother was featured in a recent Wildlife Extra article that reported on camera trap images showing her migrating between two reserves 130 kilometers or 80 miles apart!” Panthera told mongabay.com of the above image. Panthera, which is devoted to cat conservation, has a program specifically devoted to this subspecies.

Once found across the Middle East and Central Asia the subspecies is now restricted almost entirely to Iran; abundant populations that survived alongside tigers and elephants in India have vanished, and are likely gone from Afghanistan and Pakistan as well.

The world’s last population of Asiatic cheetahs remains hugely imperiled by prey decline due to decades of overhunting and ongoing poaching; habitat degradation due to overgrazing and drought; human-wildlife conflict with herders and livestock; and even cubs captured for the illegal pet trade.