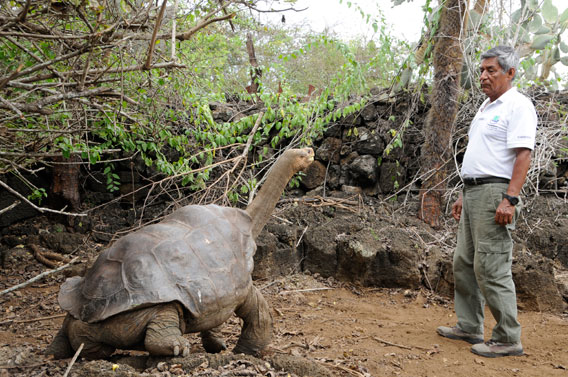 With the death of Lonesome George, the world lost the last member of a subspecies and Ecuador its greatest symbol of the Galapagos Islands, but Fausto Llerena lost his best friend.

For three decades, Llerena had been the primary keeper of the giant tortoise of over 100 years, the last survivor of the subspecies Chelonoidis abingdoni. And his devotion to Lonesome George and to conservation was recognized even in the name of the center where the tortoise lived, the Fausto Llerena Giant Tortoise Breeding and Rearing Center, on the island of Santa Cruz.

Last Sunday, when the 72 year old park ranger went to visit his friend, as he used to do even on his days off, George didn’t come to meet him as usual and he found the tortoise dead in his pen.

“I was looking after him since 1983 and he always came to greet me,” said Llerena.

Lonesome George had a “complex personality” and only “accepted up to three people in his pen at the same time, otherwise he withdrew to a quiet place. When I was there alone was when he stayed longer.”

“I was very fond of him, and would even visit him on weekends. He came to meet me and stood in front of me, stretching his neck and opening his mouth. And there he stood for a while, with his mouth open, staring at me without blinking, as if he wanted to say something. ”

“I patted his head and he stretched his neck a little further and when I left the pen he would go to rest.”

For Llerena, when George stretched his neck he “wanted to communicate, as if he was asking ‘how are you’?”. 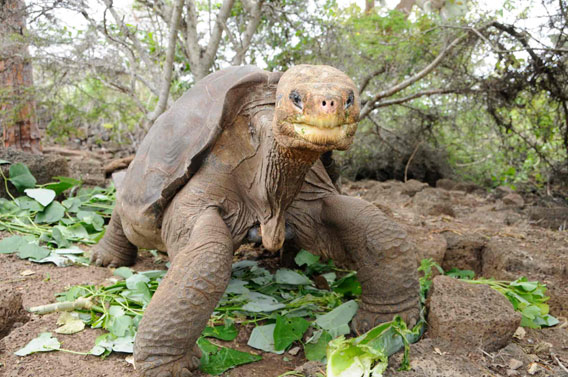 Taking care of George included cleaning the pen and the pond where he bathed, and providing him with his vegetable diet of mainly porotillo and otoy.

Llerena cared for his friend on the two occasions the giant tortoise suffered health problems. “Once I noticed he was slower, did not move as usual, and I said to him, what’s wrong? And he just raised his head and looked at me.”

A bout of indigestion was cured with papaya. “We gave him first a quarter of a papaya, then half, and finally a whole fruit until he was well and the papaya was suspended.”

On another occasion “he lost a nail. He was not moving and I went to him and noticed one of his arms was swollen. The vets gave him injections and he recovered.”

Llerena’s fascination with tortoises began at age 12, when the ranger, who was born in the province of Tungurahua, in the center of the country, first arrived with his family to the Galapagos Islands.

“My ambition then was to have a tortoise in my house. In those days there was still no national park in the area. I brought a tortoise home and kept him in my house for 20 years until he escaped from the pen.”

Llerena first met Lonesome George when the giant tortoise was found and rescued in 1972 on Pinta island, during a mission to remove goats, a species introduced by man that devastated the local habitat. 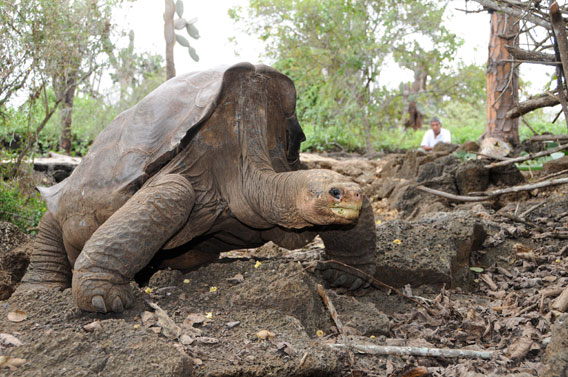 It is believed there were once about 300,000 giant tortoises in the Galapagos, but their populations were decimated by pirates who hunted them for their meat and introduced predators.

Since he was found on Pinta, George was part of the breeding program of the Galapagos National Park, but failed to leave descendants.

“I always had in my mind the thought that one day he was going to die. I was always hoping he would leave a descendant, but that was not the case”, Llerena told the BBC.

Scientists fought hard to prevent the extinction of the subspecies to which George belonged and tried to cross him with females of similar genetic characteristics.

After living with a female tortoise of the nearby Wolf volcano, on Isabela island, George did mate, but the eggs were infertile.

The legacy of George

Lonesome George died leaving no descendants, but not without leaving a legacy for conservation.

“We must be strong and carry on with our work with the same spirit, because there are many turtles here, we have 70 adults and about a thousand juveniles, we can’t afford to give up. We have to get stronger because we have more species to protect. They are not lost yet but if we neglect them something serious may happen to those species. They are still in danger”.

Llerena believes that the death of Lonesome George is a loss not only for Ecuador but for the whole world and has a message especially for young people. “We have to have more awareness of natural species, especially here in the Galapagos.”

The ranger does’nt hide his loneliness. “I had a lot of affection for him, whenever I went to the center my first stop was always checking on him, now there is no one to greet me”.

“I feel like I’ve lost a best friend, there is a void and there is sorrow, especially when I see the photos, in my heart I’m not convinced he’s dead.”

“But I have to resign myself and carry on and keep Lonesome George in my mind and in my heart for a lifetime.” 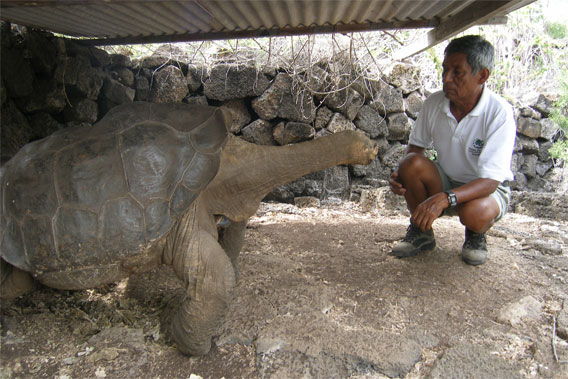 (06/25/2012) Lonesome George, the sole surviving member of the Pinta Island tortoise (Chelonoidis nigra abingdoni), was found dead on Sunday by staff at the Galapagos National Park. With George’s passing, the Pinta Island tortoise subspecies officially falls into extinction. First found in 1972, Lonesome George became famous for representing the last of his kind. He was believed to be around 100—middle-aged for a Galapagos tortoise which can live to 200 years old. Staff plan to do an autopsy to determine the cause of death.

(06/11/2012) He is so long-lived that he has surpassed all expectations, touching hearts throughout the American continent, bringing together scientists and schools, inspiring a play and now even his own biography. B95 is the name of a rufus red knot (Calidris canutus rufus), a migratory bird that in his annual journeys of 16,000 kilometers (9,940 miles) each way from the Canadian Arctic to Tierra del Fuego, in Argentina, has flown a distance bigger than the one between the Earth and Moon.