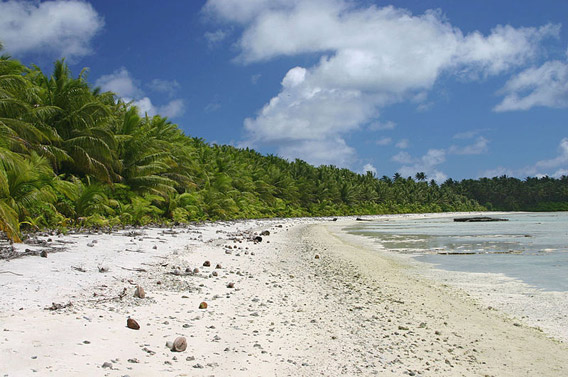 Ecologists have long argued that everything in the nature is connected, but teasing out these intricate connections is not so easy. In fact, it took research on a remote, unoccupied island for scientists to discover that manta ray abundance was linked to seabirds and thereby native trees.

Working in the U.S. owned Palmyra Atoll, deep in the Pacific Ocean, three scientists discovered an ecological chain stretching from treetops to deep waters. The atoll is an important roosting site for many seabirds. With so many birds roosting, bird droppings piled up in the soil, enriching it with nutrients, and when the tide rose those nutrients were washed out into adjacent waters. The nutrient-rich waters allowed abundant plankton populations to thrive, which in turn attracted manta rays to forage the waters near Palmyra Atoll.

At least, that’s how it should be. Cataloging this long string of connections, the researchers also recorded its disturbance: growing non-native palm trees on the island was leading to a decline in birds. The scientists recorded that when palm trees replaced native species it resulted in about five times fewer seabirds stopping to roost: less birds means less droppings, less nutrients, less plankton, and less mantra rays.

Not only did the research document an unrivaled ecological chain, it also showed how easily such hidden chains could be broken by human activity.

“What we are doing in some ecosystems is akin to popping the hood on a car and disconnecting a few wires and rerouting a few hoses. All the parts are still there—the engine looks largely the same—but it’s anyone’s guess as to how or if the car will run,” one of the researchers, Douglas McCauley, explained in a press release.

(11/16/2011) Rats are rarely thought of as heroes. In fact, in many parts of the world they are despised, while in others they serve largely as food. But, scientists are now discovering that many tropical forest rodents, including rats, serve as heroic seed dispersers, i.e. eating fruits and nuts, and carrying seeds far from the parent tree, giving a chance to a new sapling. While this has been documented with tropical rodents in South America like agoutis and acouchis, a new study in Biotropica documents the first successful seed dispersal by an African rodent: the Kivu giant pouched rat (Cricetomys kivuensis), one of four species of giant African rats.