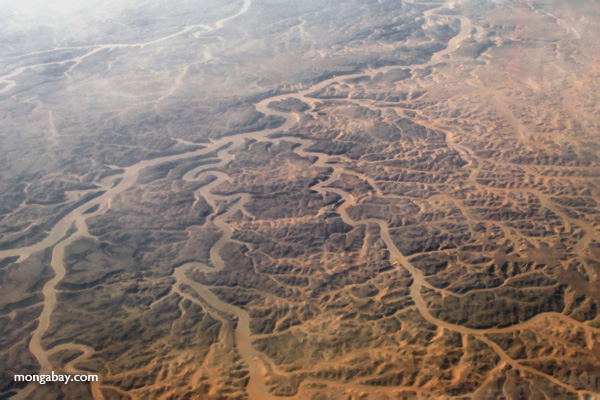 Aerial view of Egypt’s drylands. Desertification is a global problem, but a UN treaty on the issue has largely been ignored. Photo by: Rhett A. Butler.

It seems world leaders may need to retake environmental studies. As the Rio+20 Summit on Sustainable Development opens, the scientific journal, Nature, has evaluated the progress made on three treaties signed at the Rio Earth Summit in 1992: climate change, biodiversity decline, and desertification. Unfortunately the publication gives progress on all three treaties an ‘F’, highlighting how little progress has been made on the global environmental crisis.

Nature point out that world leaders have failed to stabilize greenhouse gas emissions, which have actually increased by 45 percent between 1990 and 2010. Meanwhile while nations pledged to stem the loss in biodiversity by 2010, they failed to do so, and by all accounts overall biodiversity continues to decline. Finally a little-known treaty to stem desertification has not only failed to date, but has been largely ignored.

There were no bright spots for efforts on desertification, however. World leaders were given a ‘D’ on developing indicators, since it took countries until 2009 to even develop indicators.

Although the report card has been released to coincide with the United Nation’s Rio+20 Summit, few observers are holding out any hope for an ambitious agreement that tackles issues like climate change, biodiversity, and desertification. In fact, these three issues have largely been sidelined at the summit. The agreement, which is still being haggled over, has been increasingly watered down. Still, observers are hoping for movement on protecting the oceans, ending fossil fuel subsidies, and granted more power to United Nations Environment Program (UNEP).

(06/06/2011) If swift action is not taken to prepare farmers in the developing world for hotter, drier, shorter growing seasons, climate change may threaten the lives of hundreds of millions of people by 2050. People in Africa and South Asia are particularly at risk of further impoverishment and hunger in a warmer world. According to the UN, a billion people are already going hungry worldwide.