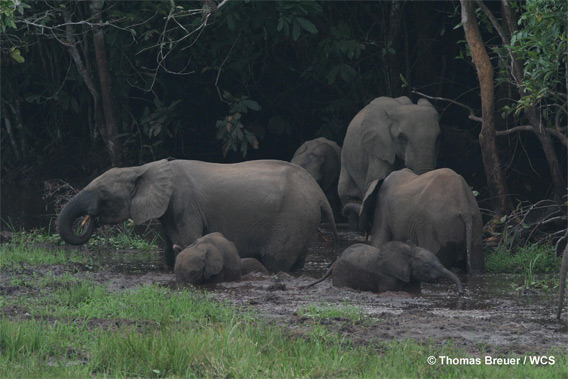 Elephant numbers in areas surveyed by the Wildlife Conservation Society (WCS) in Central Africa halved between 2006 and 2011, hinting at the carnage wrought by the surging commercial ivory trade and demonstrating a need to boost protection efforts, said the Bronx Zoo-based conservation group.

The number of elephants counted across 10,400 square miles of forest (27,000 sq km) around Republic of Congo’s Nouabalé-Ndoki National Park fell from 13,000 individuals to 6,300 during the 5-year period. But the population within the park and an adjacent FSC-certified logging concession that is patrolled by rangers has remained stable, according to WCS.

“The forces of illegal wildlife trade are decimating forest elephants in the Republic of Congo and across Central Africa,” said Paul Telfer, Director of WCS’s Republic of Congo Program, in a statement. “The remaining populations of forest elephants in protected areas such as Nouabalé-Ndoki are becoming the last strongholds for the entire species.”

WCS says the findings underscore the need to support vigilance in the region.

“Pressure from elephant poachers and ivory traffickers has become huge, and the elephants’ future, both in the park and in the surrounding area, now hangs in the balance,” said James Deutsch, Executive Director of WCS’s Africa Programs. “We need to redouble our efforts.”

Elephant poaching is driven mostly by demand for ivory in Asian markets. China and Vietnam are major destinations for elephant tusks, although considerable volumes of ivory end up in stores in the United States and Europe.

(04/09/2009) A new study finds that forest elephants may be responsible for planting more trees in the Congo than any other species or ghenus. Conducting a thorough survey of seed dispersal by forest elephants, Dr. Stephen Blake, formerly of the Wildlife Conservation Society (WCS) and now of the Mac Planck Institute for Ornithology, and his team found that forest elephants consume more than 96 species of plant seeds and can carry the seeds as far as 57 kilometers (35 miles) from their parent tree. Forest elephants are a subspecies of the more-widely known African elephant of the continent’s great savannas, differing in many ways from their savanna-relations, including in their diet.

Elephants populations in the Congo drop 80 percent in fifty years

(03/11/2009) According to the conservation organization Wildlife Direct , Wildlife Direct a recent survey of elephants in the Democratic Republic of Congo reveals that populations have dropped 80 percent in fifty years. The survey was conducted by John Hart using forest inventories, aerial surveys, and interview with local peoples.

(01/19/2009) For many endangered species it is not the lack of suitable habitat that has imperiled them, but hunting. In a talk at a Smithsonian Symposium on tropical forests, Elizabeth Bennett of the Wildlife Conservation Society (WCS) outlined the perils for many species of the booming and illegal wildlife trade. She described pristine forests, which although providing perfect habitat for species, stood empty and quiet, drained by hunting for bushmeat, traditional medicine, the pet trade, and trophies.

(10/27/2008) Forest elephants in the Congo Basin have developed a new behavior: they are avoiding roads at all costs. A study published in PLoS One concludes that the behavior, which includes an unwillingness to cross roads, is further endangering the rare animals which are already threatened by poaching, development, and habitat loss. By avoiding roads, the elephants are increasingly confining themselves to smaller areas lacking enough habitat and resources.