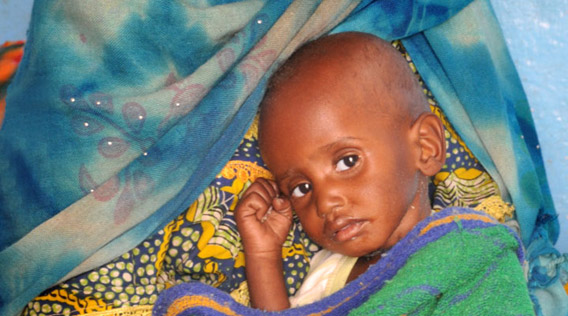 A mother with her severely malnourished child in the Sahel region. Photo: UNICEF/Chad/2012/C Tidey.

Warnings over a possible famine in Africa’s Sahel region are becoming louder and more intense. Abnormal drought, locally high food prices, and regional conflict have ramped up concerns that 18 million people could suffer from malnutrition and starvation as the lean season sets in. UNICEF says it needs $238 million to save over a million children from severe malnourishment in the region, but has to date only raised $93 million.

“Across the Sahel we are dealing with multiple needs to save lives and help children, and the Mali crisis has only put more children in danger,” said Manuel Fontaine, UNICEF Regional Director for West and Central Africa, in a press release. A military coup in Mali has pushed 100,000-200,000 refugees from Mali in to neighboring countries, exacerbating community food shortages. Recent conflict in Nigeria and Syria have further worsened the situation.

From January through April, UNICEF says it has treated 250,000 severely malnourished children under the age of five in the region.

“We are frantically increasing resources to meet demand but urgently need more funding. The harsh reality is that we are only at the tip of the iceberg in this emergency. The biggest upsurge in children needing help will be over the coming three months because the region is now in the driest and harshest period of the year,” Dennis McKinlay, Executive Director at UNICEF New Zealand, says.

Another NGO, Save the Children, says it needs $40 million more in order to adequately combat the crisis in the Sahel.

According to the World Food Program, climate change is making the region more prone to more frequent and worse droughts.

“[Droughts are] becoming even more common with climate change. This is the third drought to hit the Sahel in less than a decade. Particularly in Niger, many families haven’t yet fully recovered from the last drought in 2010 and have even less to fall back on now than they did then,” the organization says on its website, noting that the current drought has impacted the entire region, instead of just one or two countries.