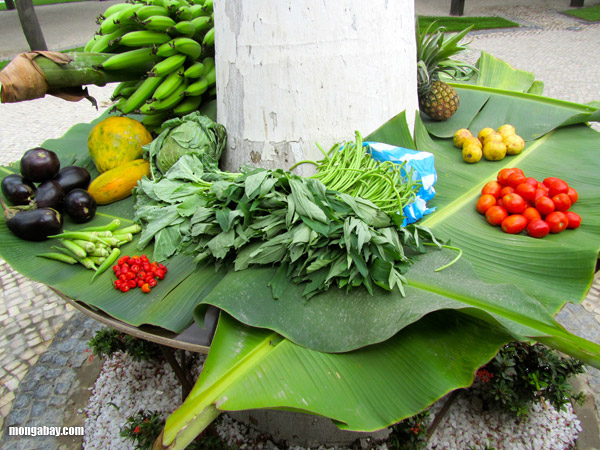 Vegetables in a Congo market. Photo by: Nancy Butler.

Compiling over 1,000 foreign land deals from 2000-2010, a new report finds that 702,000 square kilometers (271,043 square miles) of agricultural land worldwide has been sold-off to foreign governments or international corporations, an area larger than Texas. The report by the Worldwatch Institute finds that such land deals, often referred to as “land grabbing,” have declined since a peak in 2009, but still remain high.

“Most of the data paint one of two pictures: First, there is a new ‘South-South’ regionalism, in which emerging economies invest in nearby, culturally affiliated countries. The other trend is one of wealthy (or increasingly wealthy) countries, many with little arable land, buying up land in low-income nations—especially those that have been particularly vulnerable to the financial and food crises of recent years,” explains the report’s author Cameron Scherer in a press release.

According to the report, 80 percent of the land bought up by foreign entities was in Africa, making up nearly 5 percent of the continent’s total agricultural land. Such deals raise concerns that local communities will be cut-off from their traditional lands, creating land conflict and worsening poverty and hunger in already poor countries.

While most of land in question was sold out of Africa, the biggest buyers were economically rising nations; for example, Brazil, India and China made bought 24 percent of the land in the report. Other big investors included Indonesia, Malaysia and South Korea.

(05/23/2012) A palm oil company has paid indigenous Moi landowners in Indonesian Papua a paltry $0.65 per hectare for land that will be worth $5,000 a hectare once cultivated, according to a new report by the Environmental Investigation Agency (EIA) and Indonesian NGO, Telepak. The report outlines similar disadvantageous deals in timber with the same companies breaking their promises of bringing education and infrastructure.