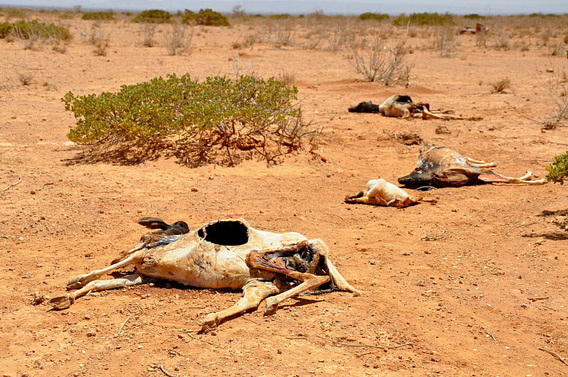 The UN warns that a million children in Africa’s Sahel region face malnutrition due to drought in region. In all 15 million people face food insecurity in eight nations across the Sahel, a region that is still recovering from drought and a food crisis of 2010. Un some countries the situation is worsened by conflict.

“We estimate that in 2012 there will be over a million children suffering from severe acute malnutrition—what’s important to know is that malnutrition can kill,” UNICEF’s Director of Emergency Programs, Louis-Georges Arsenault, said in a press release. “We need more resources to really scale up our response before it becomes too late and too many lives are lost.”

UNICEF is asking for $120 million in the region to stave off the crisis, but has received only half to date. Experts repeatedly stress that the time to act in these situations is before the hunger crisis grows acute.

Recently visiting Niger, the Executive Director of the World Food Program (WFP), Ertharin Cousin, and the High Commissioner for Refugees, António Guterres, released a joint statement warning, “the window of opportunity to save lives is narrowing by the day.”

“In the Ouallam and Maradi regions [of Niger], we saw fathers and mothers struggling to feed their families in villages where hunger has already taken hold in advance of the traditional hunger season,” the statement read. “The hungry poor—whether small-holder farmers or pastoralists—face a situation where savings are exhausted and there has been no opportunity to rebuild livestock herds.”

As a last resort livestock is often sold for food money, leaving a family bereft of their livelihood.

General Counsel for humanitarian group CARE, Kent Alexander, recently described a visit to Niger in a blog entry he called, The Real Hunger Games, after the popular young adult novel set in a post-apocalyptic U.S.

“Young children presented formal requests in envelopes to the group of visitors from CARE. Their number one request? Not toys, not new clothes, and certainly not a trip to Disney World. Drinking water. Water! This was especially striking because Ayyawane was by far the most ‘affluent’ of the villages we visited,” Alexander writes.

Just a year ago, similar drought conditions affected millions across East Africa. In Somalia, where the failed rains combined with conflict and government ineffectualness, the crisis rose to a famine, killing an estimated 30,000 children. A report released this January found that a delayed response by the international community cost thousands of lives in Somalia.

“We all bear responsibility for this dangerous delay that cost lives in East Africa and need to learn the lessons of the late response,” Oxfam’s Chief Executive, Barbara Stocking, candidly stated in a press release on the report. “It’s shocking that the poorest people are still bearing the brunt of a failure to respond swiftly and decisively. We know that acting early saves lives but collective risk aversion meant aid agencies were reluctant to spend money until they were certain there was a crisis.”

Drought is a regular occurrence both in the Sahel and East Africa, and communities have long-adapted to dry conditions. Yet some officials and scientists argue that recent droughts are worsening due to climate change, adding even more insecurity to some of the world’s most vulnerable and poorest communities.