The month in environmental news for April 2012

Mongabay.com provides a quick review of forest-related news for April 2012. 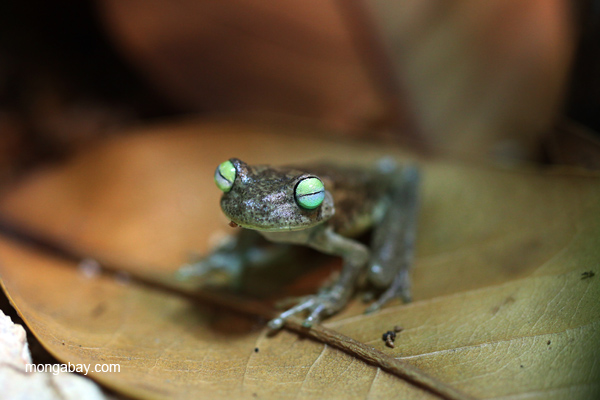 Save the Frogs Day took place in April

Chut Wutty, a prominent activist against illegal logging and deforestation, was killed in the Koh Kong province of Cambodia as he was investigating illegal logging with two journalists from The Cambodia Daily. The Cambodian government said there would be no investigation into the shooting. Wutty was married and had two children. He was 31.

Brazil’s Congress approved a controversial revision of the country’s forest code. The version is considerably weaker than the one that passed the Senate in December. Environmentalists fear the new code could reverse recent slowing in Brazil’s deforestation rate. The legislation now goes to President Dilma Rousseff for final approval. Green groups are demanding that she veto the bill, but that is unlikely. President Rousseff may however strike the most controversial elements from the revision before it becomes law.

Pictures of two uncontacted tribes in Colombia were released by the Amazon Conservation Team. The images provide confirmation that uncontacted communities still exist within the Rio Puré National Park, which protects a million hectares (2.47 million acres) of mostly pristine rainforest between the Caquetá and Putumayo River basins along the Brazilian border.

A landmark paper warned that more than 150 new dams planned across the Amazon basin could significantly disrupt the ecological connectivity of the Amazon River to the Andes. Meanwhile work continued on the massive Belo Monte dam in Brazil.

The Surui tribe in the Brazilian Amazon became the first indigenous group in the world’s largest rainforest to win certification of a forest carbon conservation project. The development potentially sets a precedent for other forest-dependent groups to seek compensation for safeguarding their native forests.

U.S. companies may be unwittingly fueling illegal logging in Peru according to an investigation by the Environmental Investigation Agency.

Whole Foods announced it will become the first grocery chain in the U.S. to no longer sell any seafood rated “red” by the Monterey Bay Aquarium and Blue Ocean Institute.

A previously unknown skink was formally described in the Socotra Archipelago off the coast of Yemen. The islands are have some of the most unusual biodiversity on the planet.

Meanwhile two dozen other skinks were described for the first time in the Caribbean.

Up to 36 new frogs were discovered in tiny fragment of forest Madagascar.

A rare leopard and tiger were photographed by camera traps in China, raising hopes that efforts to protect big cats in the country are paying off.

A paper in Conservation Letters argued the time has come to expand the universe of flagship species to raise money and awareness for conservation efforts. Highlighting Cinderella animals could raise money from donors fatigued by a relentless focus on tigers, pandas, and elephants.

A two-foot-long cloud rat was rediscovered after forty years in the Philippines.

The population of emperor penguins in Antarctica is nearly twice as high as previously estimated according to a new satellite-based assessment.

Documents under investigation show that around $90 million may have been laundered from logging companies in Sabah to UBS bank accounts linked to high-ranking Malaysian officials. Critics of the government say the money is likely kickbacks from logging companies to government officials for the right to log in the state’s declining rainforests, including protected forest reserves. Such transactions are alleged to occur typically in the run up to elections.

Indonesia’s Environment Ministry will investigate a permit issued for an oil palm plantation in heart of Tripa peat forest on the island of Sumatra. The decision came after the head of the country’s REDD+ Task Force called for a probe into the concession, which spurred international outcry led by orangutan conservation groups and local environmental NGOs.

A controversial nickel mine was shut down in Papua New Guinea due to the environmental concerns of its slurry pipeline. Built by the Chinese state company Metallurgical Construction Corporation (MCC), the Ramu Nickel Mine has been plagued by land issues, labor disputes, and environmental concerns.

The palm oil industry stepped up its efforts to convince the U.S. Environmental Protection Agency to reverse its finding that palm oil fails to meet the standards for the renewable fuels mandate. Palm oil producers, which have hired U.S.-based lobbyists, hope to get their way so they can sell more palm oil to the United States for biodiesel production. Environmentalists meanwhile said the EPA actually underestimated emissions from palm oil production, pointing to a recent study showing that nearly half of oil palm plantations in Indonesian Borneo have been planted in peatlands. Conversion of peatlands trigger substantial greenhouse gas emissions. The EPA estimate assumed that only 9-13 percent of palm oil is produced on peatlands.

Unilever announced it is in talks to build a $130 million palm oil processing mill in Indonesia as part of its commitment to use more environmentally-friendly palm oil in its products, which would be located in Sumatra, would produce about 10 percent of Unilever’s annual consumption of palm oil. Unilever also announced a new goal to purchase 100 percent of its palm oil from certified traceable sources by 2020, a target that sets a new bar for major palm oil buyers, which until now had mostly limited commitments to 100 percent RSPO-certified palm oil by 2015. Unilever said the traceability standard “means it will be able to track all the certified oil it buys back to the plantation on which it was originally grown.”

A comprehensive review of research on yields of organic and conventional agriculture found that eco-friendly farming produces less per unit of area relative to fossil fuel-powered crops. But the study found that yields of some organic crops — including some fruits and legumes — nearly match the yield performance of their conventional counterparts.

Earth Day and Save the Frogs Day came and went.