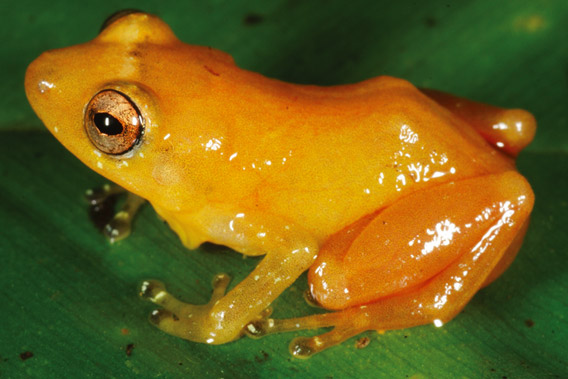 The yellow dyer rain frog (Diasporus citrinobapheus) is a new species of frog discovered in Panama. Photo by: Andreas Hertz.

A beautiful, yellow frog species has been discovered in western Panama, according to a new paper in ZooKeys. Scientists were surprised when handling the new species to find their fingers stained bright yellow by its skin, but even after laboratory research the purpose of this dye remains a mystery.

The new species, named Diasporus citrinobapheus, is a member of the large rain frog family, whose members skip the tadpole stage and instead are born directly from eggs as tiny froglets. Full-grown, the new frog is only 2 centimeters long, which made it difficult for researchers to find.

“Although we recognized that the male mating call of this species differs from all what we had heard before and therefore suspected it to be new, much effort was involved to finally spot it in the dense vegetation,” Andreas Hertz, lead author with Senckenberg Research Institute in Frankfurt am Main, said in a press release.

Hertz and colleagues named the species “citrinobapheus,” which in Greek means “yellow-dyer,” after the stain it left being on the researchers fingers.

“We cannot say whether the dye is any good as a predatory defense, as we could not find any poisonous components,” says Hertz. “Maybe the color is just easily washed out and has no particular function. However, for now, this peculiarity of the new species remains enigmatic.”

The researcher hypothesize that although the dye may not be poisonous it could have a “bitter or otherwise unpalatable taste that might deter certain predators,” according to the paper. 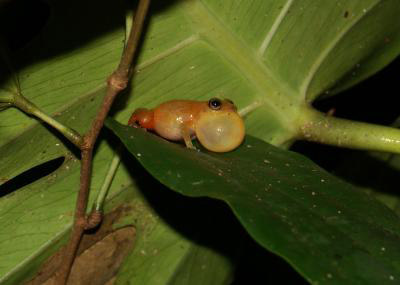