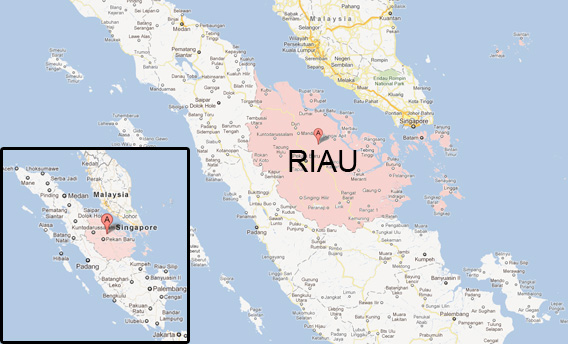 Indonesia’s Ministry of Environment is planning to sue 14 pulp and paper companies for illegally clearing forest land in Riau Province on the island of Sumatra, reports Tempo. 12 of the 14 companies are linked to Asia Pulp & Paper (APP) and Asian Pacific Resources International Holdings Limited (APRIL), pulp and paper giants that have been heavily criticized by environmentalists for destroying rainforests and peatlands that serve as critical habitat for endangered tigers, elephants, and orangutans.

According to Tempo, the Ministry of Environment is preparing a civil suit against companies named in a 2007 illegal land-clearing case that was closed in late 2008 under pressure from officials with the National Police. Damages in the case are estimated at 2,067 trillion rupiah ($225 billion) based on figures from the Judicial Mafia Eradication Task Force. The value of illegally logged timber represents only 4 percent of damages, the balance — 1,994 trillion rupiah — is for “ecological losses”, including carbon emissions, degradation of water sources and functions, erosion and soil damage, and biodiversity loss.

The Judicial Mafia Eradication Task Force last year urged the police to reopen the investigation, but its plea was ignored by the National Police Chief, the Attorney General, and the Environment Ministry until after the task force’s charter expired December 31, 2011. In January however, the Ministry of Environment said it was looking into the illegal logging allegations. In February, Ministry officials discussed the possibility of a lawsuit, according to Tempo.

The Ministry of Forestry is opposing the lawsuit, according to the report.

Both APRIL and APP say they respect the laws of Indonesia.

Sumatra lost 3.7 million hectares of forest between 2000 and 2009. Since 1985 the island lost half of its forest cover. The bulk of deforestation occurred in Riau and Jambi, where pulp and paper production has expanded the fastest.

(03/15/2012) Indonesia’s Ministry of Forestry signed off on a plan by Asia Pulp & Paper (APP) suppliers to log areas of forest that contained protected ramin species, according to documents released by Greenomics-Indonesia, an activist group. The micro-delineation documents, which are required to win approval for forestry projects in Indonesia, confirm that APP suppliers were aware that ramin trees were present in the concessions, which have since been converted to wood-pulp plantations.

Paper commitments for the Indonesian industry

(12/13/2011) The Indonesian group Asia Pulp & Paper (APP) has been the target of many NGOs for years due to its alleged negative impacts on tropical forests. This culminated in a spectacular campaign launched by Greenpeace in 2011 based on Ken “dumping” Barbie. The rationale was that toy brand Mattel was accused of using APP paper products linked to the clear-cutting of natural forests in the Indonesian archipelago. APP organized a counter-attack in the media with the daily publication of advertisements promoting its sustainable development practices. Journalists from all over the world were also invited to attend guided tours of APP concessions to demonstrate their conservation efforts, and a number of articles were subsequently written.

(05/05/2011) Efforts to slow deforestation in Indonesia should include curtailing further expansion of forestry holdings by giant conglomerates, says an Indonesian activist group. Analyzing data from the Ministry of Forest’s Production Forest Utilization Quarterly Report, Jakarta-based Greenomics-Indonesia found that seven conglomerates in Indonesia control more than 9 million hectares of land, including large forest concessions that will likely be exempt from any moratorium on forest clearing established under the country’s Reducing Emissions from Deforestation and Degradation (REDD) program. The extent of holdings could complicate Indonesia’s efforts to reduce emissions from logging and plantation development.