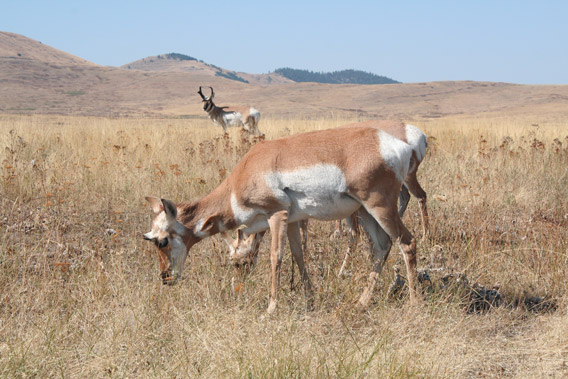 Pronghorn females with male in background in Montana. Photo by: Jeremy Hance.

Development of natural gas fields in Greater Yellowstone Ecosystem is pushing pronghorn (Antilocapra americana) out of crucial wintering grounds, a situation that could result in a population decline according to a new study in Biological Conservation. By tracking 125 female pronghorn over five years in Wyoming, researchers found that highest quality habitat had fallen by over 80 percent in two vast gas fields on land owned by the government’s Bureau of Land Management (BLM).

“In our study we have detected behavioral shifts for pronghorn in response to natural gas field development and infrastructure on federal BLM lands,” explains lead author Jon Beckmann with Wildlife Conservation Society’s North America Program in a press release. “By detecting behavioral changes, it is possible to identify threshold levels of gas field infrastructure development before any significant population declines. Maintaining the integrity of crucial wintering areas is particularly important in harsh winters to avoid diminishing pronghorn numbers.”

Since pronghorn are hunted in the area—keeping numbers below the ecosystem’s carrying capacity—researchers expected that habitat loss would have little impact on the pronghorn. Instead they found clear behavioral shifts due to the expanding natural gas infrastructure in the BLM’s Pinedale
Anticline Project Area (PAPA) and Jonah Fields, which together cover over 90,000 hectares.

“Behavioral responses by species to habitat loss may be a precursor to population impacts, such as lower reproduction and survival rates,” the researchers write.

The Wildlife Conservation Society (WCS) recommends that the government require pronghorn baseline population data before any development is allowed on BLM land, and population and habitat monitored after such development. In addition, the group says directional drilling would help habitat.

“Ultimately this is a policy issue for petroleum extraction on U.S. public lands. In several cases science indicates that petroleum developments have had negative impacts on wildlife. We are hopeful that studies like these will inform future energy development on public lands in the West,” Joel Berg, also with WCS, says.

Pronghorn are the last surviving animal in the Antilocapridae family; despite the moniker ‘prognhorn antelope’ the species is actually more closely related to giraffe and okapi than Old World antelopes. Over half of the world’s pronghorn currently live in Wyoming.