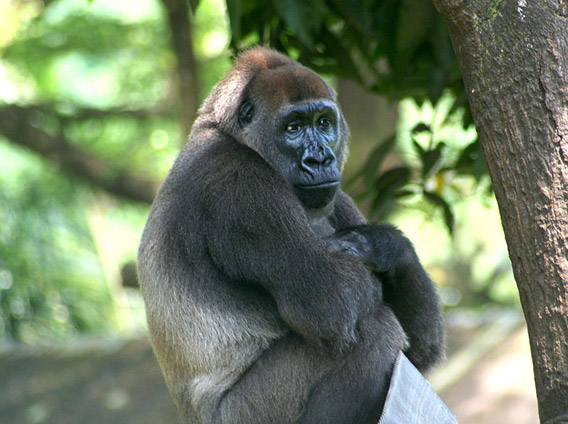 Ever wonder what it would be like to be charged by a male gorilla? A new video (below) released by the Wildlife Conservation Society (WCS), gives one a first hand look. Shot in Cameroon’s Kagwene Gorilla Sanctuary, the video is the first camera trap footage of the incredibly rare Cross River gorilla subspecies (Gorilla gorilla diehli); listed as Critically Endangered, the subspecies is believed to be down to only 250 individuals.

“The video represents the best images to date of Cross River gorillas, normally shy animals that flee at the slightest hint of human presence,” explains Christopher Jameson, director of WCS’s Takamanda Mone Landscape Project where the Cross River gorilla lives, in a press release. “The footage provides us with our first tantalizing glimpses of Cross River gorillas behaving normally in their environment. A person can study these animals for years and never even catch a glimpse of the gorillas, much less see anything like this.”

According to the researchers, one of the gorillas in the footage appears to be missing a hand. A sign that it was likely injured by a snare probably set for other animals.

“Cross River gorillas occur in very low densities across their entire range, so the appearance of a possible snare injury is a reminder that continued law enforcement efforts are needed to prevent further injuries to gorillas in the sanctuary,” said Dr. Liz Macfie, Gorilla Coordinator for WCS.

Cross River gorillas are found along the border of Nigeria and Cameroon, a region also home to the Nigeria-Cameroon chimpanzee (Pan troglodytes ellioti), a subspecies of chimp listed as Endangered. Deforestation for grazing and agriculture, hunting, low genetic diversity, and fragmentation of gorilla populations imperils the species.

Bigger is better for gorillas