Educating the next generation of conservation leaders in Colombia 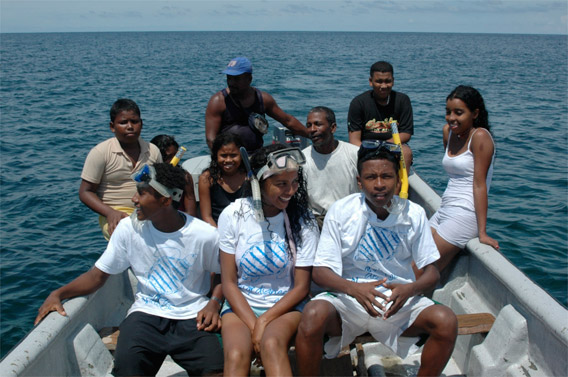 Colombia’s northern departments of Cordoba and Bolivar are home to an abundance of coral reefs, estuaries, mangroves forests, and forests. Rich in both marine and terrestrial wildlife, local communities depend on the sea and land for survival, yet these ecosystems are imperiled by booming populations, overexploitation, and unsustainable management. Since 2007, an innovative education program in the region, the Guardians of Nature, has worked to teach local children about the ecology of the region, hoping to instill a conservation ethic that will aid both the present and the future.

“These children live in some of the most beautiful and productive ecosystems on the planet, yet they don’t know it; to them they are just part of their backyard,” conservationists and the creator of Guardians of Nature, Miguel Hernandez, told mongabay.com. “Traditionally, local people exploited their environment with little concern for sustainability, and rightly so because population was low and natural resources very abundant. During the last few decades, however, the opposite has become true: burgeoning population, dwindling resources. This has resulted in the collapse or near collapse of some of these habitats.”

Hernandez says the Guardians of Nature program works to “teach kids living in critical coastal ecosystems how to appreciate and protect their own environment. We educate and empower young people not only to learn about and to do something for their environment, but also to become leaders in their communities and thus catalyst for positive change.”

Working with students from ages 14 to 18, the program includes classwork, field time, and ecological projects such as reforestation and sea turtle conservation. The program seeks to provide basic knowledge about the environments where the children live. For example, Hernandez says the students are taught the ecology of coral reefs, so they see the reefs as more than easily-destroyed “rocks” that hide their quarry.

“Making these connections is vital not only for the preservation of the environment but also for the well-being of local communities. In the context of Colombia, the role of the community is very important considering that environmental regulations are weak or unenforceable in some regions,” explains Hernandez.

Reefs in the area are imperiled by overfishing, certain fishing methods, and erosion. The Caribbean coast of Colombia also sports mangrove forests that are cut for charcoal, construction, and coastal developments. Climate change is also a rising concern. Both reefs and mangroves are vital for abundant fish populations and therefore the communities’ livelihood.

One of the keys to the program is giving the students an opportunity to connect with nature in ways they would not have the opportunity to do otherwise.

“Snorkeling in the coral reefs while learning about conservation, or releasing a baby turtle expected to come back to the same beach 20 years later, is something that we hope will stay with [our students] throughout their lives for their own personal growth and to teach others,” Hernandez says. “We also hope that our students will remain Guardians of Nature where ever they go or whatever they do.”

Hernandez says there is a number of ways to help Guardians of Nature, including donating or sponsoring a program. In addition, the program also hosts foreign volunteers, both English and Spanish-speaking, for anywhere from seven days to three months. 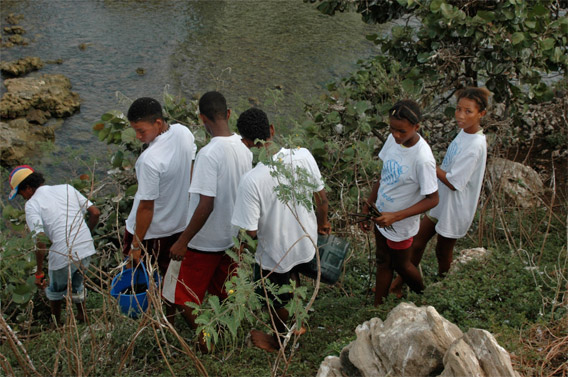 (05/13/2012) Images of several jaguars, including cubs, have been captured by camera traps on a Colombian ranch that is well known among cat researchers for its diversity of felines.

(04/19/2012) Aerial surveys of a remote area of rainforest along the Colombia-Brazil border have produced the first photographic evidence of uncontacted tribes, according to a conservation group that works to safeguard indigenous territories and culture. The photos, released by the Amazon Conservation Team (ACT), show five long houses or malokas thought to belong to two indigenous groups, the Yuri or Carabayo and Passé, some of the last isolated tribes in the Colombian Amazon. The images provide confirmation that uncontacted communities still exist within the Rio Puré National Park, which protects a million hectares (2.47 million acres) of mostly pristine rainforest between the Caquetá and Putumayo River basins along the Brazilian border.

(03/05/2012) Touching a wild golden poison frog could kill you within minutes: in fact, a single golden poison frog, whose Latin name Phyllobates terribilis is even more evocative than its common one, is capable of killing 10 humans with its one milligram dose of poison. Yet the deadly nature of this tiny frog has not stopped it from nearing extinction. Now, in a bid to save the species, the World Land Trust (WLT) and Colombian NGO ProAves have teamed up to establish a 50 hectare (124 acres) reserve in the Chocó rainforest.

(10/03/2011) Colombian president, Juan Manuel Santos, announced over the weekend that there will be no oil exploration in the award-winning Seaflower Biosphere Reserve and Marine Protected Area (MPA). Spreading over 65,000 square kilometers (6,500,000 hectares), Seaflower MPA is home to over a hundred coral species, over 400 fish, some 150 birds, four marine turtles species, and the magnificent mollusk, the queen conch (Strombus gigas).