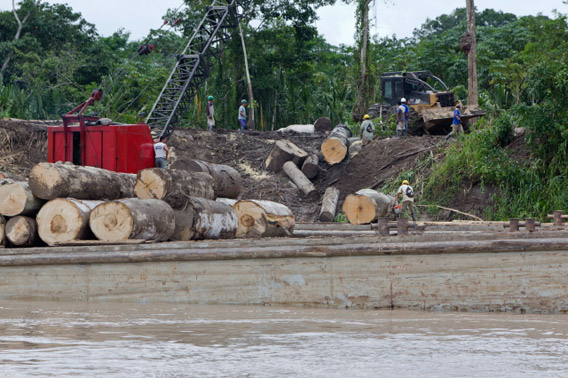 Logged wood off the Ucayali River in Peru. Photo by Toby Smith/EIA.

The next time you buy wood, you may want to make sure it’s not from Peru. According to an in-depth new report by the Environmental Investigation Agency (EIA), the illegal logging trade is booming in the Peruvian Amazon and much of the wood is being exported to the U.S. Following the labyrinthian trail of illegal logging from the devastated forests of the Peruvian Amazon to the warehouses of the U.S., the EIA identified over 112 shipments of illegally logged cedar and big-leaf mahogany between January 2008 and May 2010. In fact, the group found that over a third (35 percent) of all the shipments of cedar and mahogany from Peru to the U.S. were from illegal sources, a percentage that is likely conservative.

“Peruvian authorities currently have little capacity to control what’s happening in their forests,” reads the report, entitled The Laundering Machine: How Fraud and Corruption in Peru’s Concession System are Destroying the Future of its Forests. “Corruption and illegality remain the norm, not the exception. Officials or offices attempting to do things right often have their hands tied by lack of resources both fiscal and physical. And those who attempt to change the system are summarily dismissed or even threatened with physical violence and, in extreme cases, physically attacked.”

The EIA focused on two species of Amazon tree, cedar (Cedrela odorata) and bigleaf mahogany (Swietenia macrophylla), since both are protected under the Convention on International Trade in Endangered Species of Flora and Fauna (CITES ) and thus require special documents for export. Unregulated tree species would simply have been impossible to track, and are likely illegally logged and exported at even higher rates.

According to the report, it’s not difficult to dupe the Peruvian or the U.S.’s regulatory systems. Forest concession-holders falsely report how much cedar or mahogany is in a particular area and then use the overinflated number to gain extra documents. Trees illegally logged outside the concession, often in protected areas or indigenous lands, are given the documents, dressing them up to look “legal.”

The EIA has been given assurances by U.S. importers that the wood is legal because it comes with the requisite documents. But according to the report officials and traders “are perfectly aware of how meaningless these documents are.” Still, those knowingly importing illegally logged wood from Peru may face investigation under the recent amendment to the U.S. Lacey Act, which makes the importation or possession of illegally sourced wood products a crime in the U.S.

In addition, in 2007 the U.S. and Peru signed a Free Trade Agreement, giving the U.S. wide latitude to investigate any evidence of illegal timber entering the U.S.

“The US government has the right to ask for audits or verifications and to impose a variety of sanctions, including the delay or denial of shipments,” reads the EIA report, but notes that “little has been done to enforce the agreement.” 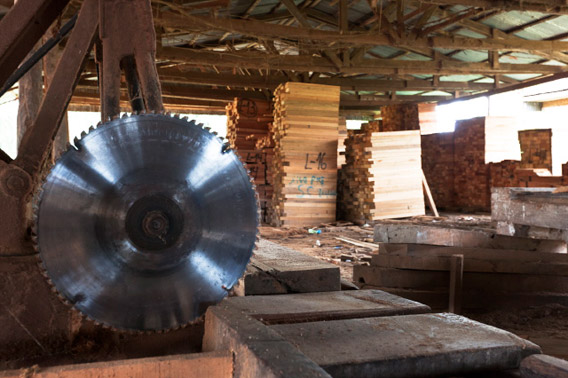 The EIA team visit a saw-mill that processes cedar and other timbers from the Loreto Forest. Photo by Toby Smith/EIA.

The EIA’s investigation highlighted one logging corporation in particular: the Bozovich Group which has logging and wood companies in Peru, Mexico, Bolivia, and the U.S. According to the report, 70 of the 112 allegedly illegally logging shipments tracked by the EIA were from the Peruvian branch of the Bozovich Group, Maderera Bozovich. In addition, 52 of these shipments ended up at the U.S. Bozovich branch based in Alabama.

Notably the U.S. Bosovich has a number of products certified by the Forest Stewardship Council (FSC), one of the world’s leading wood certification systems. The group prohibits certifying any wood linked to illegal logging, still the organization has also been dogged by criticism for its practices, including certifying clearcutting, monocultures, and companies linked to local conflict.

“Serious problems regarding the legal origin of a significant portion of the products sold by the Bozovich group, if not necessarily the wood harvested or exported under FSC labels,” the EIA report reads.

In all the report found evidence of 22 U.S. companies importing allegedly illegally logged wood from Peru.

Although rarely a priority for law enforcement agencies, illegal logging bears a heavy cost. According to the World Bank, in 2002 Peru lost $70 million from illegal logging alone, including losses in tax revenue, fees, and value of timber stands. But such numbers do not include the loss of ecosystem services that the Amazon provides, such as a decline in biodiversity, carbon storage, and freshwater protection.

The social costs are high as well. Illegal logging often leads to conflict with indigenous groups, and the report found a number of instances where indigenous people were deceived in order to gain access to timber on their lands.

“Deadly local epidemics and violent conflict have resulted from contact between loggers and indigenous peoples in voluntarily isolation,” the report notes.

In addition, illegal logging is often linked to other criminal activities, such as forced labor and sexual slavery with victims held against their will and treated violently. Many fear for their lives.

“Peru’s current logging industry is a model that has nothing to do with meaningful economic development,” Julia Urrunaga of EIA said in a press release. “The real human toll of these illegal practices is demeaning and ugly.”

The systematic nature of the illegal logging also puts Peru’s burgeoning REDD+ program (Reducing Emissions from Deforestation and Forest Degradation) into doubt according to the EIA, which notes that Peru will likely receive around $150 million to reduce emissions through better forest protection.

“Unless Peru and its international donors acknowledge the systemic failures of governance in the current forest
sector and judicial system, it is unlikely that any REDD strategy will be successful,” the report reads.

The report recommends that Peru should raise the issue of illegal logging to a “national priority” and conduct a thorough reform of the system, including strengthening law enforcement agencies to better deal with illegal logging, support indigenous groups to manage their own forest concessions, create better mechanisms to trace woods, rapidly investigate any irregularities, and list more tree species under CITES.

The campaigners note that Peru appears to be making some progress, noting that government data proved essential to their investigation.

“Additional oversight by Peruvian agencies is beginning to demonstrate the extent of fraud in the sector—but hopefully to change it as well,” said Andrea Johnson with EIA. “We urge Peru to continue down the path of transparency and reform on which it’s headed, and call upon governments and buyers to support these efforts wholeheartedly. The future of the world’s most magnificent forests depends on it.”

The U.S. government for its part must request wood audits under the Fair Trade Agreement, and investigate local companies under the Lacey Act which may be knowingly importing illegally logged wood from Peru.

In the meantime, the report says that “wood from Peru should be currently be considered very ‘high risk’ for international buyers concerned about legality and compliance under laws such as the Lacey Act or the European Union Timber Regulation, or about possible actions under the U.S.-Peru Free Trade Agreement.” 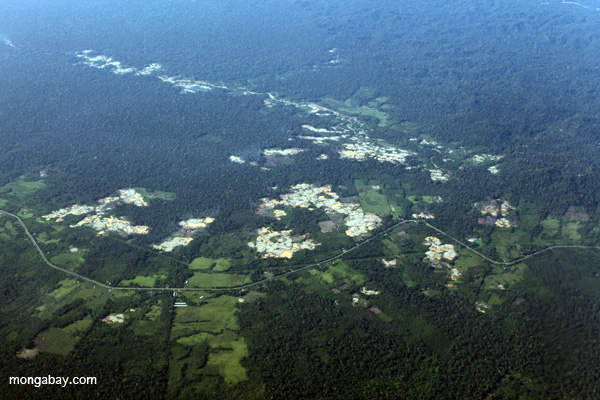 Mosaic of deforestation and illegal gold mining near the Transoceanic highway in Peru. Photo by: Rhett A. Butler.

(01/11/2012) An investigation by Brazil’s Federal Police has detailed a significant trade of illegally logged rainforest wood by Peruvian nationals making its way from northern Brazil to the U.S. and Mexico, reports O Globo.

(03/22/2012) Illegal logging has never been a high priority for criminal investigators, but a new report by the World Bank says it should be. Worldwide, the illegal logging epidemic is decimating natural resources, imperiling biodiversity, emitting carbon, and undercutting the livelihoods of local and indigenous people. But the lucrative funds from these ill-gotten gains is just as problematic: top organized criminals rake in $10-15 billion annually from illegal logging and largely use the funds to drive corruption.

(02/03/2012) Confiscated timber stocks in Madagascar must be managed in a “transparent manner” to deter future illegal logging and boosting demand for endangered rainforest timber, says a letter published by a coalition of NGOs.