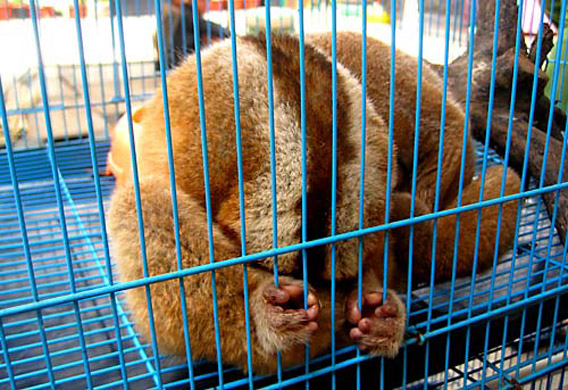 Defying Indonesian law, slow lorises are being sold openly in Jakarta markets for the underground pet trade, according to wildlife trade monitoring group TRAFFIC. In the last two weeks, TRAFFIC has recorded fifty different individual slow lorises on sale in the Indonesian capital.

“The openness of the slow loris trade highlights the fact that having one of the region’s best wildlife protection laws and promising to protect species is not enough—there must be stronger enforcement in Indonesia and the public should stop supporting the illegal wildlife trade,” says Chris R. Shepherd, Deputy Regional Director of TRAFFIC Southeast Asia, in a press release.

The slow loris pet trade has exploded since YouTube videos showed the small primates engaged in “cute” activities. However, researchers warn that slow lorises do not make good pets and that the trade is deeply cruel. Slow loris babies are stolen from their mothers in the wild, who are often killed. The baby’s teeth are removed without anesthetic to make them more “suitable” as pets.

Dr. Anna Nekaris, an anthropologist who specializes in slow-loris research at Oxford Brookes University, told mongabay.com in 2009 that it’s estimated 30-90 percent of captured slow lorises don’t survive the stress of being stolen from the wild.

As pets, slow lorises are unable to clean themselves and are often covered in feces and urine. In addition, due to complex dietary needs pet slow lorises often die of malnutrition.

In one market alone, TRAFFIC counted thirty slow lorises and notes that the animals are on sale daily out in the open.

“The authorities need to clean up these markets and Indonesia’s reputation as a major center of illegal wildlife trade,” says Shepherd.

In addition to the pet trade, slow lorises are also imperiled by deforestation and traditional medicine, which uses slow loris parts for some ailments.

‘Snakes on a Plane’ trafficker freed early from jail