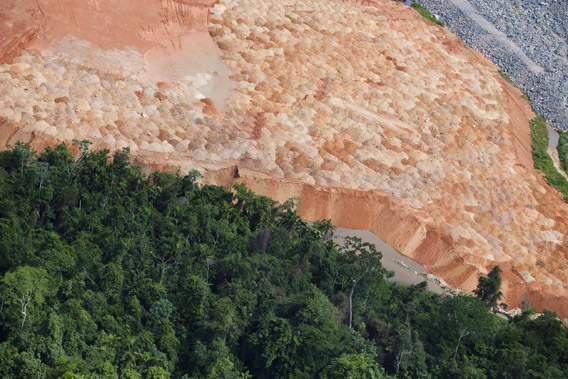 More than 150 demonstrators protested outside Vale’s headquarters in Rio de Janeiro during the Brazilian mining giant’s annual shareholder meeting over the company’s social and environmental record, reports Amazon Watch, a group that is fighting the massive Belo Monte dam.

Amazon Watch said some the protesters were workers and community members affected by Vale’s operations, which span globally. Among the complaints was Vale’s 9 percent stake in the Belo Monte dam, a project that will flood large tracts of rainforest and indigenous lands in the Brazilian Amazon. Belo Monte has been widely condemned by human rights groups and environmental NGOs.

Activists released an “Unsustainability Report” [PDF] in conjunction with their protests. The report highlights social and environmental concerns around Vale’s operations.

As a public company that has invested heavily in its corporate image, Vale may be particularly vulnerable to such criticism. Earlier this year Vale won the Public Eye Award, a dubious honor that recognizes the world’s “worst company”, according to the award’s organizers. In response to the award, Vale defending its stake in Belo Monte by arguing the project “is consistent with the company’s growth strategy.”

(03/07/2012) The UN’s International Labor Organization (ILO) has released a report stating that the Brazilian government violated the rights of indigenous people by moving forward on the massive Belo Monte dam without consulting indigenous communities. The report follows a request last year by the The Inter-American Commission on Human Rights for the Brazilian government to suspend the dam, which is currently being constructed on the Xingu River in the Amazon.

(01/31/2012) The world’s second largest mining company, Vale, has been given the dubious honor of being voted the world’s most awful corporation in terms of human rights abuses and environmental destruction by the Public Eye Awards. Vale received over 25,000 votes online, likely prompted in part by its stake in the hugely controversial Brazilian mega-dam, Belo Monte, which is being constructed on the Xingu River. An expert panel gave a second award to British bank Barclay’s for speculation on food prices, which the experts stated was worsening hunger worldwide.

(01/19/2012) Damming of the Xingu River has begun in Brazil to make way for the eventual construction of the hugely controversial, Belo Monte dam. The Norte Energia (NESA) consortium has begun building coffer dams across the Xingu, which will dry out parts of the river before permanent damming, reports the NGO International Rivers. Indigenous tribes, who have long opposed the dam plans on their ancestral river, conducted a peaceful protest that interrupted construction for a couple hours.