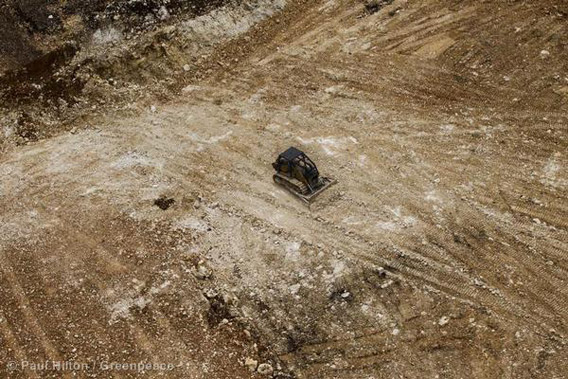 Locals protesting the destruction of their forest in Papua New Guinea for two palm oil plantations say police have been sent in for a second time to crack-down on their activities, even as a Commission of Inquiry (COI) investigates the legality of the concession. Traditional landowners in Pomio District on the island East New Britain say police bankrolled by Malaysian logging giant Rimbunan Hijau (RH) have terrorized the population, including locking people in shipping containers for three consecutive nights. The palm oil concessions belongs to a company known as Gilford Limited, which locals say is a front group for RH.

“The current situation is very bad. The [villagers] are trying their best to do (a) blockade, but because of the police involvement the people are very scared to stand up and defend their land and speak their rights. The logging operation is still going on and is destroying the big forest, the rivers, and sea more every day,” a local landowner told mongabay. The landowner spoke on anonymity for fear of reprisal.

Last year, complaints over mistreatment by police in logging areas rose to such a feverish pitch across Papua New Guinea that police commissioner, Tom Kulunga, withdrew all police forces from logging areas in the country. But now locals in Pomio, at least, say the police have returned and abusive practices continue.

“The police have mistreated the locals by abusing them with sticks, fan belts, telling them to sit in the sun for five hours, swearing at them, arriving in the villages at nigh forcing them to sign papers with the people understanding the content, tying their hands to their back, and commanding them to run in the hot sun,” the landowner said, noting that the alleged abuse began on March 5th.

The landowner also said that the police locked up six people in shipping containers for three nights.

Last year, locals said the police were paid and flown in by Rimbunan Hijau (RH), which was confirmed by Assistant Police Commissioner Anton Billy to the Australian Broadcast Corporation (ABC) in an interview. He told the ABC that this was “normal.”

“We don’t have any funds to get these people there and pay them allowance and all this stuff,” Billy said. 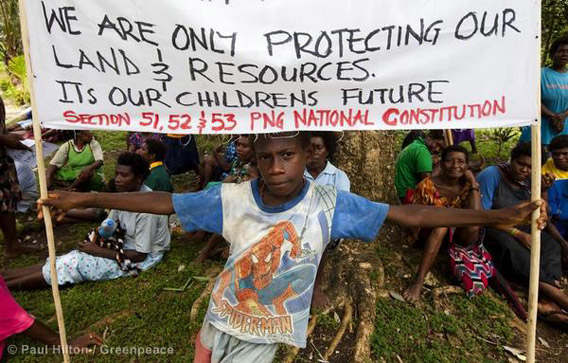 People from Pomio protest the destruction of their traditional forests under Special Agricultural and Business Leases (SABLs). Photo by: Paul Hilton/Greenpeace.

The two palm oil concessions in question, covering some 26,000 hectares for a 99-year lease, are a part of a hugely controversial land program by the Papua New Guinea government known as Special Agricultural and Business Leases (SABLs). Critics contend SABLs are being used en masse to circumvent Papua New Guinea’s strong community land laws—where 97 percent of the land is ostensibly owned by local communities—granting massive areas of land to foreign corporations for extractive activities such as logging. SABLs have led to conflict and deforestation across Papua New Guinea. Last year the government suspended any new SABLs and launched an independent investigation into the practice, which up to then had handed over 5.2 million hectares to foreign corporations, an area larger than Costa Rica.

A Commission of Inquiry (COI) has been set up to investigate particular problems with the two palm oil concessions in Pomio, including allegations of fake signatures—such as signing children’s names to official documents—and other irregularities.

“The people facilitating the paperwork falsely wrote other peoples names and used false signatures. Some of these have already been proved false by the Commission of Inquiry (COI) in Kokopo,” the source says.

“The forest set-ups are now all destroyed and it has affected the villages very badly,” the source says, noting that projects in Mauna, Lau, Bairaman, and Mu have been decimated.

Given the tension and reports of on-going abuse, the annonymous source says its time for the independent investigation to step in.

“My people and I want the Commission of Inquiry to fast track its report and present it to the cabinet. The report must include recommendations, and one recommendation must state that all SABLs be terminated and the land returned to the real landowners.”

A 2009 study found that nearly a quarter of the Papua New Guinea’s forests were already lost or degraded by logging between 1972-2002. Still, the nation retains one of the world’s largest intact rainforests aside from the Amazon and the Congo, and most of its populace are directly dependent on the forest for their livelihood. Given that almost all the land is community owned, there are very few protected areas in Papua New Guinea. The first national conservation park, YUS Conservation Area, was established in 2009. 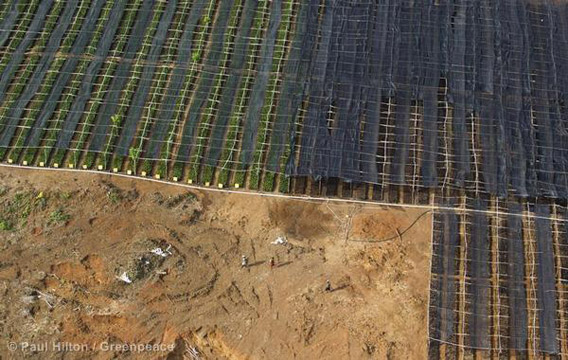 The beginnings of a palm oil plantation on newly deforested area in Pomio District. Photo by: Paul Hilton/Greenpeace.

Losing our pigs and our ancestors: threats to the livelihoods and environment of Papua New Guinea

(10/27/2011) In 1968, distinguished anthropologist Roy Rappaport wrote a seminal publication of human ecology: ‘Pigs for the Ancestors: Rituals in the Ecology of a New Guinea People’ which integrated cultural ritual with the necessity of maintaining pre-existing relationships with the environment. Documenting the behavior activities of the Tsembaga Maring tribe in the Highlands of Papua New Guinea, Rappaport recognized how various activities of the tribe’s intrinsic culture was a direct product of that peoples’ relation with their natural environment.