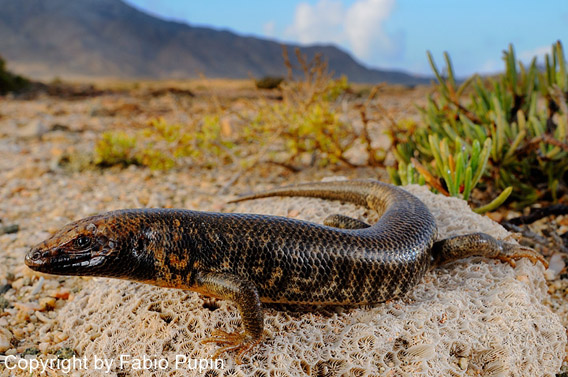 Trachylepis cristinae, a newly described skink that is only found on Abd Al Kuri Island. Photo by: Fabio Pupin.

Few people have ever heard of the Socotra Archipelago even though, biologically-speaking, it is among the world’s most wondrous set of islands. Over one third of Socotra’s plants are found no-where else on Earth, i.e. endemic, while 90 percent of its reptiles are also endemic. Adding to its list of unique life-forms, researchers have recently uncovered a new skink species that is found only on the island of Abd al Kuri, which is slightly smaller than New York City’s Staten Island. Dubbed the “the other Galapagos,” the four Socotra islands are under the jurisdiction of Yemen, although geographically speaking the islands are actually closer to Somalia.

“While in Socotra in 2010, we eventually had the chance to organize a short trip to the smaller islands of the archipelago, which are hardly reachable due to heavy seas for most of the year, and pirate activity in the area facing Somalia,” team member Fabio Pupin, herpetologist and photographer, told mongabay.com. “[We were] able to spend at least one day and one night in each of the three islands (Samha, Darsa and Abd Al Kuri). While in Abd al Kuri, Cristina Grieco, one of the team members, found a quite huge skink under a bush. We captured it for identification and measurements and we instantly realized that the skink was clearly different from all the others we met before on the islands. However, we had to hold down excitement until we properly compared its morphological features with other [skink] species and molecular results definitively confirmed our suspicions.”

Describing the new species in a paper in Zoological Scripta, the team of researchers named it Christine’s mabuya (Trachylepis cristinae), after its discoverer. With the discovery of the new skink, the small island of Abd al Kuri is now home to five reptiles found no-where else on Earth.

“As probably happened quite often in other parts of the world, skinks may have reached the archipelago by rafting on logs or other floating vegetation. Reptiles such as skinks and geckos have proved to be incredibly good dispersers, and they are even known to have crossed the Atlantic ocean,” Pupin says.

The paper hypothesizes that skinks in the Trachylepis genus arrived in the Socotra Archipelago twice this way. The first immigrant arrived around 10 million years ago and colonized three islands (Socotra, Darsa and Samha), eventually evolving into the species known today as the Socotra mabuya (Trachylepis socotrana). A second immigrant arrived seven million years later on Abd al Kuri Island and has now taken its rightful place as Christine’s mabuya.

The mushroom-shaped dragon blood trees are the islands’ most famous plants. Photo by: Fabio Pupin.

The landscape of the Socotra islands resembles a Hollywood film set on another planet: rocky and dry, but hauntingly beautiful, with strange umbrella-shaped trees—evocatively named the dragon blood tree (Dracaena cinnabari), because the species’ resin is the color of blood.

“These are some of the oldest islands in the world. Million of years of isolation from nearby continents provided the flora and fauna of the islands with the textbook situation of surviving and evolving in their own ways. That’s why the islands are inhabited by such an impressive number of endemics. It’s quite a general rule to find peculiarities on islands, but what makes Socotra Archipelago so amazing is its amount of endemics: just considering reptiles, they are almost all endemic (except those which are believed to have reached the islands thanks to us) with ancient lineages and genera, including multiple species clearly adapted to different habitats,” explains Pupin.

In addition to reptiles, the Socotra Archipelago is also home to around 145 bird species, 10 of which are only found on the islands; and around 100 land snail species, 95 of which are endemic. The only native mammals are bats. Given this rich biodiversity, it’s not surprising that the islands were designated a UNESCO World Heritage Natural site in 2008.

Perhaps, however, the most surprising thing about the Socotra Archipelago is that it has not been swept by extinctions like so many other of world’s islands. To date, scientists believe the islands have lost none of their endemic birds, reptiles, or mollusks in the last century; compare that to the Hawaiian Islands which has lost nearly one-third of its endemic birds. Still, even though the Socotra Archipelago is largely protected and are not unused to humans (a population of around 50,000 has lived on the archipelago, mostly Socotra Island, for thousands of years), researchers fear that the Socotra Archipelago could soon begin to see its biodiversity vanish if the region is mismanaged. 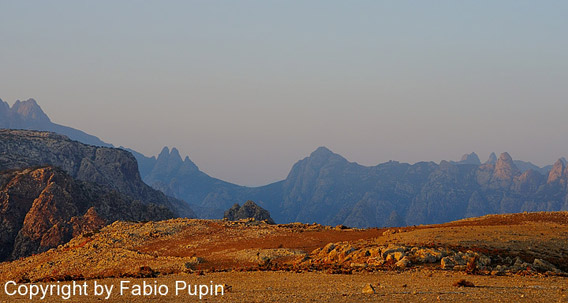 The mountains of Socotra Island. Photo by: Fabio Pupin.

Socotra’s biodiversity face a number of common island threats, including habitat loss, overpopulation, invasive species, climate change, and more recently a sudden rise in tourism. Although benefiting the local economy, poorly-regulated tourism can put a hefty toll on the very ecosystems that visitors long to see. In 2010, over 3,000 tourists visited Socotra Island.

In addition, recent upheavals in Yemen have made the island’s future tenuous. Like many Middle Eastern nations, Yemen felt the impacts of the Arab Spring. After widespread protests, including violent crackdowns on protesters, power in the country was transferred to then Vice President, Abd Rabbuh Mansur Al-Hadi, in a vote where Al-Hadi was the only candidate. The vote, however, ended the 33-year reign of Ali Abdullah Saleh.

“Currently the conservationist’s main concern is the political instability in Yemen and the results it will have on the biodiversity conservation of the islands in the incoming years. By now, almost any project in the islands involving westerner personnel has been stopped and no one knows how the situation will evolve,” Pupin says. “What we hope is that the endless finding of new species—our skink is just one of the many new discoveries of the islands’ fauna and flora—will hold the attention of the general public and decision-makers on this biodiversity paradise.”

In the meantime, researchers will just have to wait to see how much the new government in Yemen values its alien islands. 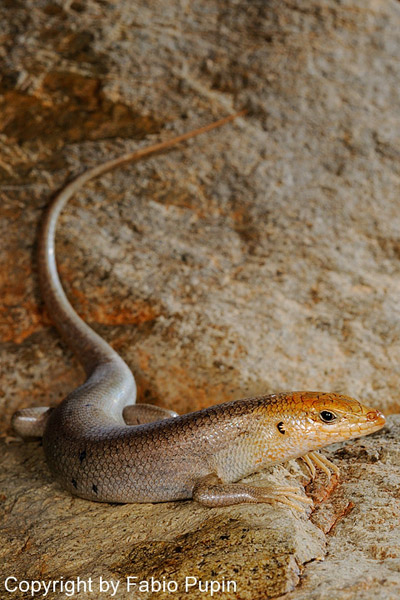 Socotra’s other skink: Trachylepis socotrana, endemic to the archipelago and present on all of the islands except Abd Al Kuri. Photo by: Fabio Pupin. 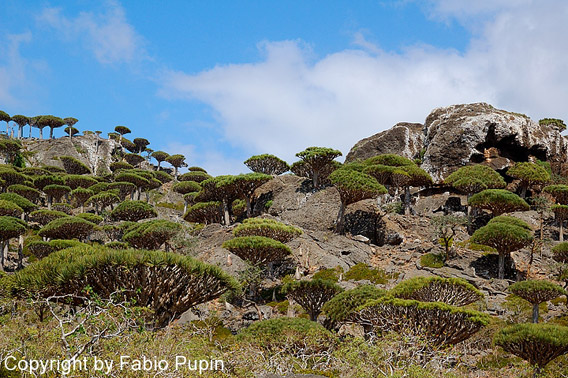 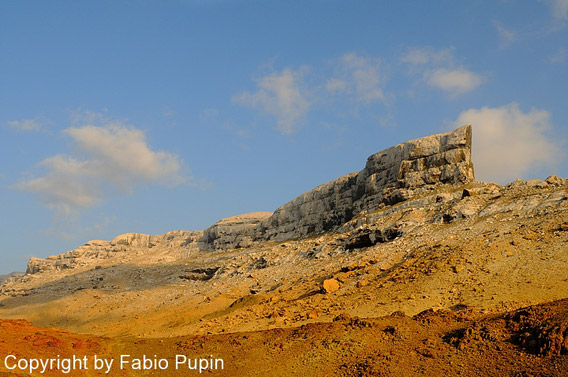 The rocky environment of Samha Island, one of the smallest in the archipelago. Photo by: Fabio Pupin. 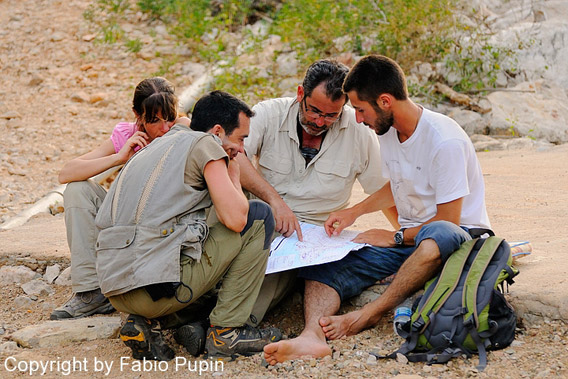 (04/23/2012) Scientists have discovered four new species of brilliantly-colored freshwater crabs on the Philippine island of Palawan. Described in the Raffles Bulletin of Zoology, the new species expands the genus, Insulamon, from one known crab species to five. Although its ecosystems are threatened by widespread mining and deforestation, the Philippines is a mega-diverse country, meaning that it belongs to a select group of 17 countries that contain the bulk of the world’s species.

Blue iguana back from the dead

(07/18/2011) The blue iguana (Cyclura lewisi) was once king of the Caribbean Island, Grand Cayman. Weighting in at 25 pounds, measuring over 5 feet, and living for over sixty years, nothing could touch this regal lizard. But then the unthinkable happened: cars, cats, and dogs, along with habitat destruction, dethroned Grand Cayman’s reptilian overlord. The lizard went from an abundant population that roamed the island freely to practically assured extinction. In 2002, researchers estimated that two dozen—at best—survived in the wild. Despite the bleak number, conservationists started a last ditch effort to save the species. With help from local and international NGOs, the effort, dubbed the Blue Iguana Recovery Program, has achieved a rarity in conservation. Within nine years it has raised the population of blue iguanas by twenty times: today 500 wild blue iguanas roam Salina Reserve.