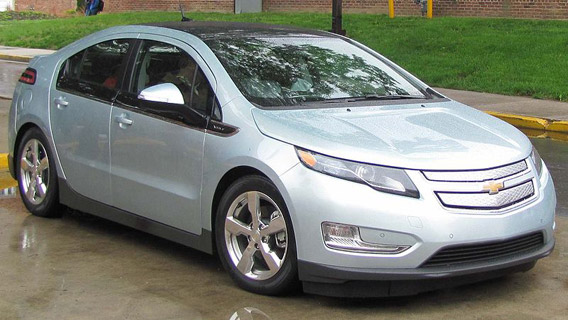 After being outed as a financial contributor to the conservative advocacy group Heartland Institute, known for its denial of global climate change, General Motors has faced harsh criticism from environmentalists. The car company, which is pushing its new all-electric model, the Chevy Volt, has now announced it will no longer be contributing to the Heartland Institute.

“We’ve looked into it, and we’ve decided to discontinue it,” a spokesperson from General Motors told the LA Times.

General Motors received extra pressure from the climate group Forecast the Facts, which organized an online campaign to push the company to stop donating to the Heartland Institute, including gathering signatures from 10,000 previous and current General Motors’ customers.

Heartland Institute President Joseph Bast said in a statment for the press, “The General Motors Foundation has been a supporter of The Heartland Institute for some 20 years. We regret the loss of their support, particularly since it was prompted by false claims contained in a fake memo circulated by disgraced climate scientist Peter Gleick.”

Documents were leaked from Heartland Institute by climatologist Peter Gleick, who gained access to the documents after pretending to be a board member via email. In an admission published in Febraury, Gleick called his actions a “serious lapse of my own and professional judgment and ethics.”

While much has been made of the memo released with the documents–Gleick says he received it anonymously in the mail, while Heartland insists it’s a fake– the memo was largely a summary of information found in the other documents leaked by Gleick.

In addition to listing Heartland’s funders, which includes an anonymous donor that funds the bulk of the group’s work on dismissing climate science, the documents also reveal plans by Heartland Institute to craft curriculum that would teach school kids that anthropogenic climate change is “a major scientific controversy,” despite the fact that most scientists don’t see it that way. According to the documents, Heartland Institute plans to pay Dr. David Wojick $100,000 this year to write-up the curriculum.

Nearly all climate scientists, as well as the world’s major scientific institutions, agree that the Earth is warming and human activities are the primary driver. Since the Industrial Revolution global temperatures have risen 0.8 degrees Celsius (1.44 degrees Fahrenheit). Evidence is strengthening that climate change is not only melting glaciers and Arctic sea ice, but also fueling extreme weather disasters, such as floods, droughts, and heatwaves.

(02/21/2012) Climatologist Peter Gleick with the Pacific Institute has admitted to obtaining documents from the conservative advocacy group, the Heartland Institute, through a fake name and leaking them to the press.

(02/15/2012) The Heartland Institute, a conservative advocacy group, is threatening to sue journalists, bloggers, and activists who reported on internal documents that detail the group’s fundraising efforts and lay out a new program to replace climate change education in schools with curriculum meant to instill doubt on climate science.