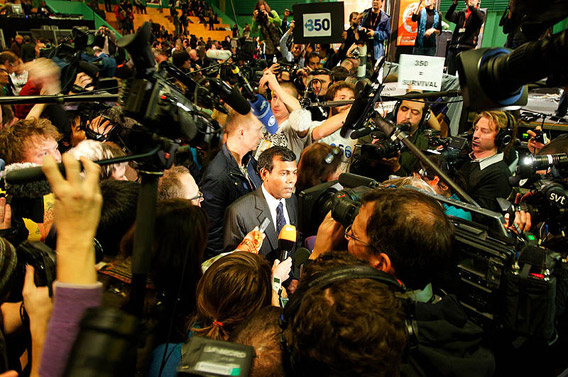 Former president of the Maldives, Mohamed Nasheed speaking to reporters at the Copenhagen Climate Summit in 2009. Photo by: Adam Welz.

Mohamed Nasheed, former president of the Maldives, told the world on The Daily Show Monday night: “Just don’t be so silly” about climate change. Nasheed, who in February was forced to resign his presidency, is visiting the U.S. to meet with government officials as well as to push for climate action during the release of a new documentary film about his presidency, entitled The Island President.

During his three years in office, Nasheed was arguably the world’s most impassioned leader on the issue of climate change. The Maldives, an archipelago of around 2,000 islands in the Indian Ocean, includes some of world’s most low-lying islands. Nasheed has argued that if global society allows the world to warm by 2 degrees Celsius, the current pledge made by governments around the world, it will force the abandonment of the Maldives as the islands sink under rising sea levels. Before its ouster, his government even looked at purchasing land abroad as a home new for his people.

In fact, Nasheed told the host of The Daily Show, Jon Stewart, that the impacts of climate change are already forcing populations to be relocated from some islands.

“Climate change is an issue that is happening now. We have sixteen islands that need relocation; we have water contamination issues; we have fishing problems; the coral bleaching issue… there’s a whole list of things that are happening now and people have to take note of that,” he said.

A government coup in February led to Nasheed’s resignation as president, which he says was at gunpoint, although the opposition says it was voluntary. Nasheed argues that the coup was organized by Maumoon Abdul Gayoom, the former dictator of the Maldives, and has referred to the current president, Mohammed Waheed Hassan, as a “puppet president” with Gayoom holding the power. Nasheed has also stated that the current government has attempted to have him killed. Before becoming president, Nasheed was held as a political prisoner by Gayoom, and was tortured twice.

The coup came after Nasheed’s administration controversially arrested a judge, who they argued was protecting past officials under the dictatorship from corruption charges.

However, Nasheed told Jon Stewart that the political fight in the Maldives was not about his presidency, but about democracy. He has urged the new government to hold democratic elections before the end of the year.

On climate change, however, Nasheed stressed that the issue went far beyond his nation.

“It’s not just the Maldives. More than a quarter of the world’s population is living on coastal areas. Manhattan is as high as the Maldives actually,” he said.

The documentary,The Island President, follows Nasheed from his victory in the Maldives’ first democratic election in 2008 to his battle at the Copenhagen Climate Summit in 2009 for a climate treaty that would preserve his homeland. Despite the lackluster outcome at Copenhagen, Nasheed says it was a meaningful step forward.

“I would argue Copenhagen was a victory; for the first time the United States, China, India, Brazil—big emitting countries—agreed to limit their carbon emissions. They were not able to agree upon the amounts of it, but they agreed on the principle of limiting it,” he told Stewart.

Jon Stewart asked Nasheed if some developing countries were dragging their feet on climate change, because they keen to mimic the West’s industrial revolution.

“Simply because the United States and the industrial world has been poisoning the atmosphere for the last 300 years, it doesn’t mean that the rest of the world should be doing exactly that. There are low carbon development strategies, and renewable energies; the technology is there. I hope that people would start recognizing this and come to a more amicable understanding,” Nasheed said, adding. “Just don’t be so silly.”

Still Nasheed, who appeared optimistic despite a lack of movement on climate change, noted that current agreements by the world’s governments to limit average temperatures from rising above 2 degrees Celsius (3.6 degrees Fahrenheit) would still doom his home.

“The Maldives won’t be around. It’s no good for us anyway. But we were hoping that from 2 degrees there will be a possibility that we may be able to come to 1.5 degrees [Celsius],” he said.

While governments around the world have agreed to keep temperatures from rising above the 2 degree Celsius level, they have not yet put forward ambitious enough cuts to achieve even that target. If all emissions cuts put forward to date are achieved, a big ‘if’, the world would still warm around 3.5 degrees Celsius (6.3 degrees Fahrenheit), a level that most scientists consider dangerous.

Nasheed told the audience to “please watch the film” and “be concerned [about climate change].”

“I’m afraid politicians only do the things that their people tell them to do, and I’m afraid the people of the United States are not telling their politicians to be concerned about climate change,” he said.

(01/30/2012) NASA has created a new animation showing global temperatures on a map of the Earth from 1880-2011. On the map, blues represent temperatures lower than baseline averages, while reds indicate temperatures higher than the average. As the 131 years pass, the map turns from bluish-white to increasingly yellow and red. Caused by the burning of fossil fuels, deforestation, agricultural practices, and other human impacts, climate change has currently raised temperatures 0.8 degrees Celsius (1.44 degrees Fahrenheit) higher than the Industrial Revolution average.

(01/12/2012) A new study in Science argues that reducing methane and black carbon emissions would bring global health, agriculture, and climate benefits. While such reductions would not replace the need to reduce CO2 emissions, they could have the result of lowering global temperature by 0.5 degrees Celsius (0.9 degree Fahrenheit) by mid-century, as well as having the added benefits of saving lives and boosting agricultural yields. In addition, the authors contend that dealing with black carbon and methane now would be inexpensive and politically feasible.

(12/04/2011) Total carbon emissions for the first time hit 10 billion metric tons (36.7 billion tons of CO2) in 2010, according to new analysis published by the Global Carbon Project (GCP) in Nature Climate Change. In the past two decades (since the reference year for the Kyoto Protocol: 1990), emissions have risen an astounding 49 percent. Released as officials from 190 countries meet in Durban, South Africa for the 17th UN Summit on Climate Change to discuss the future of international efforts on climate change, the study is just the latest to argue a growing urgency for slashing emissions in the face of rising extreme weather incidents and vanishing polar sea ice, among other impacts.