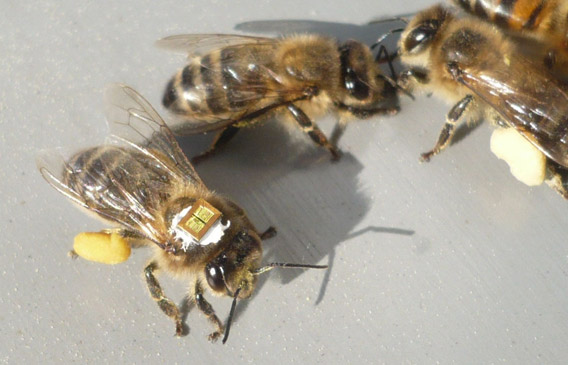 A honeybee tagged with an RFID microchip for tracking its movements. Photo © Science/AAAS.

Commonly used pesticides may be a primary driver of the collapsing bee populations, finds two new studies in Science. The studies, one focused on honeybees and the other on bumblebees, found that even small doses of these pesticides, which target insect’s central nervous system, impact bee behavior and, ultimately, their survival. The studies may have far-reaching repercussions for the regulation of agricultural chemicals, known as neonicotinoid insecticides, that have been in use since the 1990s.

Scientists first started recording alarming declines in bees in North America in 2006, including some bee producers losing up to 90 percent of their colonies. Similar declines occurred throughout Europe, and have also been recorded in Taiwan. Known as Colony Collapse Disorder, bee hives are found missing nearly all of their adult bees. While colony collapses have been recorded since the 19th Century, the current crisis has proven much worst than past ones.

A number of theories for the collapse have been posited, including disease, parasitic mites, habitat loss, and, of course, pesticides. Some researchers have suggested a combination of these factors. While pesticides has been an important target of studies for years, researchers have had proving that pesticides, which aren’t immediately lethal, might still be harming bee colonies—until now.

“Some bumblebee species have declined hugely. For example in North America, several bumblebee species which used to be common have more or less disappeared from the entire continent. In the U.K., three species have gone extinct,” explains Dave Goulson of the University of Stirling, U.K., co-author of a study that looked at the long-term impact of neonicotinoid insecticides on bumblebees.

The U.K, team exposed buff-tailed bumblebees (Bombus terrestris) to small doses, similar to what is expected in the wild, of a commonly used neonicotinoid pesticide called imidacloprid, and placed the bees in an enclosed natural setting where they could forage free. After six weeks, the team weighed the nests and compared them with control colonies that had not been exposed. Pesticide-exposed colonies were on average 8-12 percent smaller than the colonies that had not been exposed, which implies that exposed bees were not gathering as much food.

However, even more alarming was the case of the missing queens. Pesticide-exposed colonies produced 85 percent fewer queens: a total of only around 1-2 queens per hive. Queens are the most important bees in a colony, since they found new colonies after winter when all the other bees perish. The researchers are not yet sure why pesticide-exposed bees produce fewer queens, though it may be that less food gathering results in less queens overall.

“This is likely to have a substantial population-level impact,” the researchers note, adding that, “We predict that impacts of imidacloprid on reproduction of wild bumble bee colonies are likely to be widespread and significant, particularly as this chemical is registered for use on over 140 crops in over 120 countries.”

If it’s true as the previous study implies, that neonicotinoid pesticides impact a hive’s ability to collect sufficient food, how does it do that? The second study in Science finds a possible answer.

French scientists glued tiny microchips to free-ranging western honeybees (Apis mellifera) in order to track their movements. They then administered small does of a different neonicotinoid pesticide, called thiamethoxam, to a portion of the bees. Exposed bees were two to three times more likely to not return from foraging excursions than unexposed bees. This implies that the pesticide impacts the bees’ homing ability, so instead of returning to the hive, bees get lost and perish.

“Such an additional mortality might represent a heavy burden to bear for colonies exposed to treated crops in their environment,” the researchers write. They found that the more unfamiliar and complex a terrain was, the more likely that exposed bees would not return.

Employing computer modeling, the researchers found that the pesticide’s impact on the bees could be large enough to decimate populations to the point of no return.

Not lethal, but still deadly

Although disturbing, the results of these studies is not particularly surprising. Since neonicotinoid pesticides work by impacting insect’s central nervous systems, researchers have long raised concerns about the role they could play in Colony Collapse Disorder.

But what the two new studies show is a clear link between pesticide-use in the field, as opposed to the laboratory, and large-scale bee declines. Like many chemicals, just because neonicotinoid pesticides don’t immediately kill bees, doesn’t mean they don’t have a disastrous impact.

“Our study raises important issues regarding pesticide authorization procedures. So far, they mostly require manufacturers to ensure that doses encountered on the field do not kill bees, but they basically ignore the consequences of doses that do not kill them but may cause behavioral difficulties,” explains lead author Mikaël Henry of INRA, in Avignon, France.

When used, neonicotinoid pesticides become pervasive in the environment and can persist for months to years.

“Systemic pesticides, in particular, diffuse throughout all the tissues as plants grow-up, and eventually contaminate nectar and
pollen. Foraging honey bees are therefore directly exposed, but also the rest of the colony as returning foragers store or exchange contaminated
material,” the study’s authors write.

In fact, another study published earlier this year in PLoS ONE, found that dead bees in Indiana, which had perished from Colony Collapse Disorder, had several different neonicotinoid pesticides in their systems. These researchers also found several pesticides in pollen in the bees’ hives as well as in nearby soils.

Bees are key species. They play vital roles in a wide-variety of ecosystems as pollinators. In turn they provide massive economic benefits to human society, both through the production of honey and pollination of a large variety of fruit, vegetable, nut, and flower crops.

“Bumblebees pollinate many of our crops and wild flowers,” says Goulson, adding that, “the use of neonicotinoid pesticides on flowering crops clearly poses a threat to their health, and urgently needs to be re-evaluated.”

The economic value of honeybees in the U.S. alone has been estimated at $8-12 billion.

(01/04/2011) Many US bumble bee populations have declined significantly over the past few decades, with certain species dropping off by as much as 96%. While the decline is linked to low genetic diversity and disease, an underlying cause remains uncertain.

Loss in biodiversity may be killing bees

(01/20/2010) A decline in diverse plants species on which to feed may be causing a similar decline in bee survival, according to a new paper in Biology Letters.

The honeybee can count

(01/29/2009) Plato once said: “numbers are the highest degree of knowledge: it is knowledge itself.” By Plato’s standards researchers have just discovered that the honey bee is a knowledgeable insect indeed. The honey bee can count to three in an instant according to a new study in the online journal PLoS ONE. Using dots and other abstract symbols, scientists from the Vision Centre in Australia tested whether the honey bees had the ability to count items in their environment.

Pollination worth $216 billion/yr for food production

(09/16/2008) Pollination services provided by insects are worth $216 billion (€153 billion) a year reports a new study published in Ecological Economics. The figure represents about 9.5 percent of the total value of world agricultural food production.