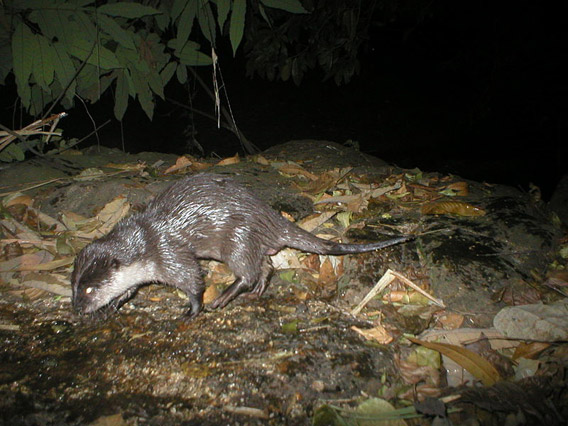 An Asian small-clawed otter caught on camera trap in the Western Ghats. Photo by: Clusteronefloyd.

In the fragmented rainforests of India, many animals must move through human-modified landscapes such as agricultural fields to survive. This includes the world’s smallest otter species: the Asian small-clawed otter (Aonyx cinereus). According to a new study published in mongabay.com’s open access journal Tropical Conservation Society (TCS), the Asian small-clawed otter is widespread in streams flowing through tea and coffee estates of the Western Ghats, but requires improved protection.

Listed as Vulnerable by the IUCN Red List, the Asian small-clawed otter is imperiled by habitat loss and pollution that has decimated its prey. It has already vanished from some areas of India due to these pressures. But scientists hope more research on Asian small-clawed otters’ needs could conserve the species where it remains. Still the challenges are large as the researches write that the Western Ghats are “one of the most densely populated and human-modified biodiversity hotspots in the tropics” with tea and coffee monocultures going back hundreds of years.

Sampling 66 streams for otter dung, dens, and footprints in a protected area (Anamalai Tiger Reserve) and nearby tea and coffee estates (the Valparai plateau) researchers found that otters were present in 75 percent of the streams regardless of whether it was a protected area or agricultural field. However, they found that streams in the agricultural areas were much less intensely used by otters. According to the scientists, the most likely reason for the less-intensive use was a lack of refuge areas, such as boulders, burrows, and logs. In addition, less diverse foliage along the river could be another factor. Finally, Asian small-clawed river otters may be impacted by fishing, sand mining, and pollution in the agricultural estates.

The researchers recommend retaining and restoring native vegetation around rivers as well as tackling pollution problems, especially a concern in coffee areas.

“A step in this direction has been made with the introduction of certification of coffee and tea plantations,” they write adding that, “engagement with corporate bodies who own large tea and coffee plantations, which enclose riparian forests, is necessary in order to achieve that.”

Finally the researchers urge that biologists conduct more studies of aquatic and semi-aquatic species in tropical forests, such as river-loving otters, since they have long been neglected compared to tropical terrestrial animals.

(12/19/2011) The rainforests of Western Ghats are home to some of the most wonderful creatures which are found only in these forests and no where else on the earth. The Lion-tailed Macaque Macaca silenus is the symbol of this endemic diversity of this biodiversity hotspot. Less than 2500 of these survive today making it one of the most endangered primates in the world. In 2008, a healthy population of 32 groups of these macaques were found in central Karnataka giving hope to the future of these Knights of the Western Ghats