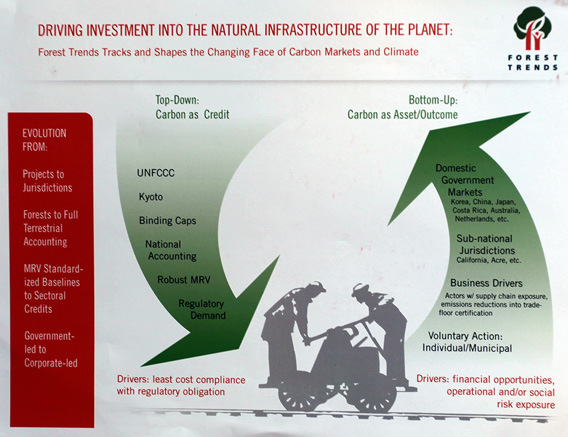 Shifts in the carbon market, according to Forest Trends. Click image to enlarge

Despite slow progress via the U.N. process and other intergovernmental bodies, national governments, municipalities, and the private sector are moving ahead with initiatives to measure and compensate the value of services afforded by ecosystems, said a leading forestry expert speaking on the sidelines of the Skoll World Forum on Social Entrepreneurship meeting this week in Oxford.

Michael Jenkins, President and CEO of Forest-Trends, said that although top-down approaches like a global regulatory market for carbon and other ecosystem services have not emerged, bottom-up approaches led by the private sector are showing promise and influencing national policies.

“People are discouraged about lack of progress top-down approaches, but what’s sometimes overlooked are the countercurrents. There is patchwork of activity happening at national, municipal, and local levels with businesses,” Jenkins told mongabay.com.

Jenkins pointed to initiatives in jurisdictions ranging from China to Oklahoma to Australia. More than a dozen case studies are highlighted in Ecosystem Marketplace’s Bringing it Home: Taking Stock of Government Engagement with the Voluntary Carbon Market.

“What’s interesting is the interplay between regulatory markets at national and sub-national levels and their willingness to embrace tools — like registries and standards — that have been developed in the voluntary space,” he added.

Through experimentation with different approaches, the voluntary sector effectively has built out the infrastructure that is now being adopted by the regulatory sector.

“In the patchwork there aren’t 100 different systems because they are coming out of what’s already been developed in the voluntary sector.”

Jenkins added that while the regulatory market for carbon has stalled, the voluntary market is thriving and interest in environmental services has never been higher.

“Everyone now understands the term ‘ecosystem services’ — that wasn’t the case a few years ago.”

(05/03/2010) Over the past 30 years billions of dollars has been committed to global conservation efforts, yet forests continue to fall, largely a consequence of economic drivers, including surging global demand for food and fuel. With consumption expected to far outstrip population growth due to rising affluence in developing countries, there would seem to be little hope of slowing tropical forest loss. But some observers see new reason for optimism—chiefly a new push to make forests more valuable as living entities than chopped down for the production of timber, animal feed, biofuels, and meat. While are innumerable reasons for protecting forests—including aesthetic, cultural, spiritual, and moral—most land use decisions boil down to economics. Therefore creating economic incentives to maintaining forests is key to saving them. Leading the effort to develop markets ecosystem services is Forest Trends, a Washington D.C.-based NGO that also organizes the Katoomba group, a forum that brings together a wide variety of forest stakeholders, including the private sector, local communities, indigenous people, policymakers, international development institutions, funders, conservationists, and activists.