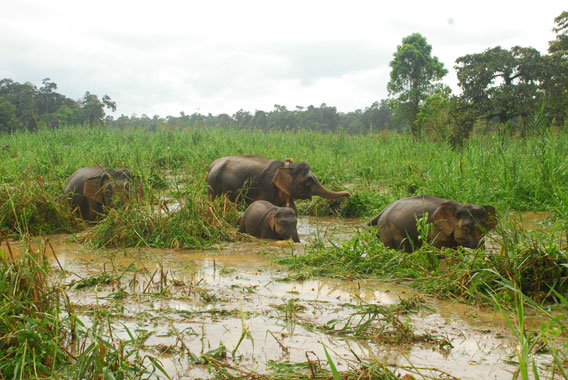 Putut (center) and her family, after being collared in October 2011. Photo courtesy of Benoit Goossens.

Forest fragmentation and destruction is imperiling the Bornean elephant (Elephas maximus borneensis), according to a new paper published in PLoS ONE. Using satellite collars to track the pachyderms for the first time in the Malaysian state of Sabah, scientists have found that the elephants are extremely sensitive to habitat fragmentation from palm oil plantations and logging.

“Once the key forest habitat for elephants is cleared, and the availability of the food plants and water sources altered, elephants are forced to expand and shift their ranges in the search for resources to meet their needs,” the authors write, noting that any habitat smaller than 310 square miles (500 square kilometers) may be unable to support an elephant population over the long-term. The more fragmented a habitat, the further the elephant herds have to travel to find the resources they need. The research also found that the best habitat for Bornean elephants was lowland forests made up of dipterocarp trees.

“We would highlight two recommendations to ensure the long-term conservation of the Bornean elephant: all remaining lowland dipterocarp forests which support elephants should be retained under natural forest management and must not be converted to plantations; and forest disturbance needs to be minimized wherever wild elephants occur. In timber production forests, this can be achieved by limiting the extent and frequency of logging operations in any given management compartment,” said co-author Benoit Goossens, Director of Danau Girang Field Center and a senior research associate at Cardiff University, in a press release.

The findings have already impacted logging operations in Sabah, according to co-author Laurentius Ambu, director of the Sabah Wildlife Department.

Conservationists further hope to establish a wildlife corridor through palm oil plantations to connect herds in the Lower Kinabatangan River region to those in the Segaliud Lokan Forest Reserve.

“The elephants in Lower Kinabatangan were separated from Segaliud Lokan Forest Reserve for 25 years, due to habitat fragmentation and Borneo Conservation Trust (BCT) is in the process of getting the key oil palm plantation companies to support the initiative to set aside a corridor to connect the fragmented forest,” said lead author Raymond Alfred, head of research and conservation at BCT. “At the recent Sabah Wildlife Conservation Colloquium, the Minister of Plantation Industries and Commodities Tan Sri Bernard Dompok said that he wanted the Federal Government to help Sabah in the wildlife corridor initiative to link up pockets of forest land for wildlife survival and supported the idea of the Government acquiring land for the purpose.” 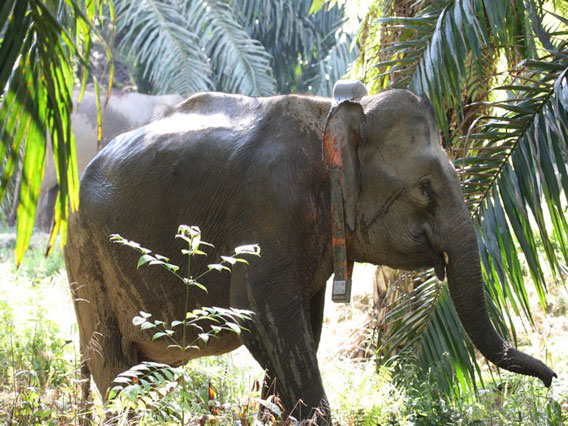 Bod Tai, after being collared in 2005 in the Kinabatangan, roaming in a palm oil plantation. Photo courtesy of Benoit Goossens.