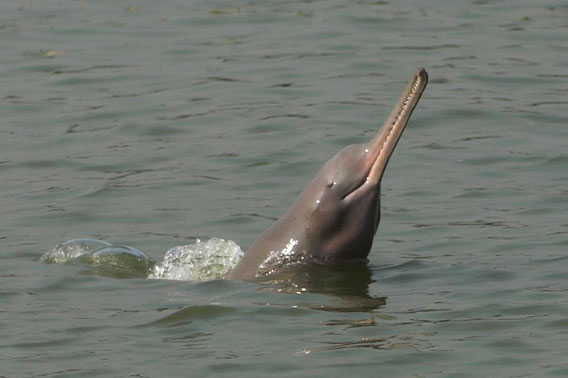 Ganges River dolphin in the Sundarbans. Photo by: Rubaiyat Mansur.

Smith and co-authors with the Bangladesh Forest Department wrote a study for Oryx in 2010 that led to the proposal of the three new sanctuaries. The protected areas span 19.4 miles (31.4 kilometers) of channels in the Sundarbans.

The south Asian river dolphin faces a wide-variety of threats including dam projects, drowning as by-catch, pollution, prey loss due to overfishing, changes in salinity levels from rising seas, and in some cases targeted hunting. Many of these same threats pushed the baiji to extinction. However, the south Asian river dolphin may have a better chance to survive in the long run: in 2009, WCS announced the discovery of 6,000 Irrawaddy dolphins surviving in Bangladesh, the biggest population known to date. One of the keys to saving the species will be working with local communities.

“The wildlife sanctuaries will be used as a natural laboratory for developing management practices that balance wildlife conservation with the resource demands of a large and growing human population,” explains Tapan Kumar Dey with the Forest Department.

The new sanctuaries will also benefit other endangered species such as the northern river terrapin (Batagur baska), a river turtle listed as Critically Endangered; the masked finfoot (Heliopais personata), a freshwater bird listed as Endangered; and the oriental small-clawed otter (Aonyx cinerea), listed as Vulnerable. 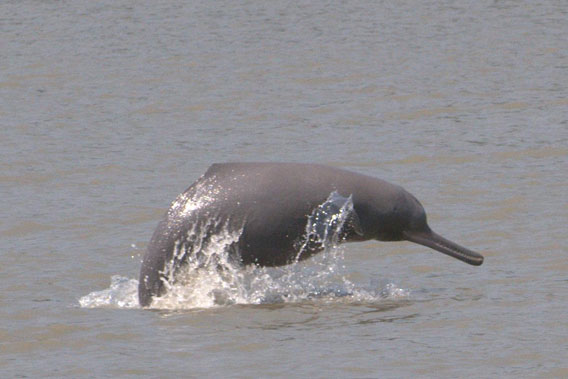 (01/24/2012) Threats to marine mammals usually include climate change, drowning as by-catch, pollution, depletion of prey, but what about eating marine mammals? A new study in Biological Conservation finds that a surprising 87 marine mammals—including polar bears, small whales, and dolphins—have been eaten as food since 1990 in at least 114 countries.

(03/08/2011) The Indian government has announced that it plans to develop a program to raise the population of its native Ganges river dolphin (Platanista gangetica gagnetica), a subspecies of the South Asian river dolphin. During a question and answer session Jairam Ramesh, India’s Environment and Forests Minister, said that the dolphin’s current population was estimated at 2,000 to 3,000 individuals in the Ganges. However, other estimates have placed it lower.

(07/19/2009) The Ganges River Dolphin faces a high risk of extinction in India’s Brahmaputra river system unless critical habitat is protected, report conservationists. Once abundant in the Ganges and Brahmaputra river systems in India and Bangladesh, the population of the Ganges River Dolphins has fallen sharply over the past century due to accidental bycatch by fishermen, direct killing for their meat and oil, and diversion of water for agriculture. Scientists estimate that only 2,000 remain, of which 240-300 survive in the Brahmaputra, according to a new survey by IUCN researchers, who warn the Brahmaputra population is also imperiled by new threats, including dam building and prospecting for oil.