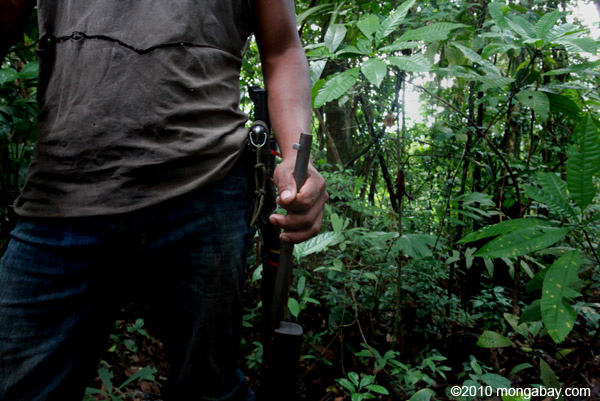 Hunter in the Colombian rainforest. Photo by: Rhett A. Butler.

Protected areas in the world’s tropical rainforests are absolutely essential, but one cannot simply set up a new refuge and believe the work is done, according to a new paper in Bioscience. Unsustainable hunting and poaching is decimating tropical forest species in the Amazon, the Congo, Southeast Asia, and Oceana, leaving behind “empty forests,” places largely devoid of any mammal, bird, or reptile over a few pounds. The loss of such species impacts the whole ecosystems, as plants lose seed dispersers and the food chain is unraveled.

“In many parts of the tropics, hunting is now the biggest threat to tropical biodiversity,” writes the paper’s author, tropical ecologist Rhett Harrison. “There is a need to acknowledge the unpalatable but undeniable fact that current tropical conservation efforts are failing.”

Currently around 18 percent of the world’s tropical forests are under some level of protection, a statistic that is seen as a measure of success by conservationists, however hunting and poaching remain rampant. Although most severe in Southeast Asia and Africa, concerns are also rising in the Amazon as well.

Harrison argues that small protected areas and those that do not possess big charismatic species—such as jaguars or elephants—are especially vulnerable to poaching activities due to long neglect from conservationists and policy-makers.

“Smaller reserves (1000–10,000 hectares) tend to be regarded as being of low conservation priority. However, such reserves are a critical component of protected-area networks in tropical regions with relatively little original forest cover remaining; they make up a substantial proportion of the habitat and biogeographic diversity, and often the only examples of species-rich lowland forest,” Harrison explains.

Poaching of big animals such as elephants, tigers, and rhinos often make the most news, but Harrison says smaller, less well-known animals are just as vital to the maintenance of the ecosystem. Hunters often target fruiting trees for their quarry killing off frugivorous (fruit-eating) birds and mammals. These frugivorous species are key to dispersing the seeds of “large-seeded plants, which include many of the slower-growing canopy trees,” Harrison notes. The loss of such species in a forest could change the entire plant community. Less slow-growing, big trees may even lessen a forest’s capacity to store carbon and other important ecosystem services.

What’s become known as the “empty forests syndrome” has been propelled by a number of issues: lack of funding for parks, dearth of wildlife rangers, and new roads and development projects opening up once inaccessible rainforests.

“Reserve-management authorities are often grossly underfunded and, in addition, have to contend with a gamut of secondary problems, such as limited political support, poor infrastructure, overstretched education systems, inefficient legal systems, and corruption,” explains Harrison in the paper. A lack of data exacerbates the problem, according to the paper: “Reserve authorities are, of course, reluctant to admit that they have enforcement issues, and extirpations from nature reserves are rarely reported. It is therefore difficult to obtain an accurate picture of how wildlife is faring in most reserves.”

Poverty plays a major role in some parts of the world. Communities that do not have easy access to domesticated protein-sources, such as many villages in Madagascar, often turn to bushmeat for protein. But, just as problematically, commercial bushmeat is also becoming a luxury item in some parts of the world. In Ecuador, for example, the bushmeat trade has expanded from sustainable indigenous hunting to a much larger trade serving restaurants along major highways in the Amazon. Bushmeat also makes its way from forest communities to urban areas: a recent survey in Brazzaville, the capital of the Republic of the Congo, found that 88 percent of households had bought bushmeat at urban markets. In Southeast Asia, the traditional Chinese medicine plays a major role in emptying out regional forests for target “medicinal” species.

“Local communities often regard the forest as their birthright and hunting—even of endangered species—as an important cultural tradition,” notes Harrison, adding that that in order for subsistence hunting to be sustainable in rainforests “human densities cannot exceed about one person per square kilometer,” but that there are already “46 people per square kilometer in the Neotropics, 99 in Africa, and 522 in Asia.” While there are remote, largely untouched forests in the Amazon, New Guinea, and the Congo, Harrison fears that even these forests will soon be threatened by hunters as more forests are opened up by roads often built for extractive industries.

Harrison recommends a variety of measures to save wildlife from unsustainable hunting. Number one, the conservation community must stop measuring success by the amount of land set aside as protected. Instead success should be determined by effective enforcement in parks, intact wildlife communities, and the changes in abundance of high-target species. Conservationists must also start thinking outside the box.

“For example,” he writes, “in Ghana, it was found that a significant fine applied to the sale of bushmeat in urban markets was sufficient to reduce hunting to sustainable levels.” In addition, conservationists should work with logging and energy companies to strictly enforce hunting rules on their concessions. Research has shown that well-managed industrial concessions can still possess a wide-variety of species.

But he notes that the situation is so dire in many protected areas that it’s time to consider “restoring” populations of vanished animals; unless this is done, he writes, “it cannot be assumed that so-called ‘protected’ forests will survive in anything approximating a natural state.”

For poor countries, combating poaching doesn’t have to be seen as a burden. Instead, governments must see maintaining wildlife as central to their economy.

“Many tropical nations earn large sums of money from nature-based tourism, but governments often remain ignorant of the essential role that wildlife and nature reserves play in underpinning the industry, and prefer instead to invest in golf courses,” Harrison writes, adding that “partnerships with tour operators and government tourist agencies may therefore be an effective way of lobbying for improved wildlife management.” 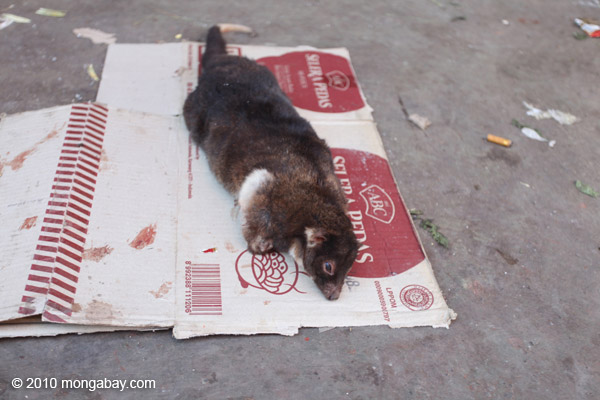 Cuscus being sold as meat in the Wamena market. Photo by: Rhett A. Butler. Iguana killed by hunters in Suriname. Photo by: Rhett A. Butler. Lizard-on-a-stick in in Chinese market. Photo by: Rhett A. Butler. Songbirds in the Luang Prabang morning market in Laos. Photo by: Rhett A. Butler. 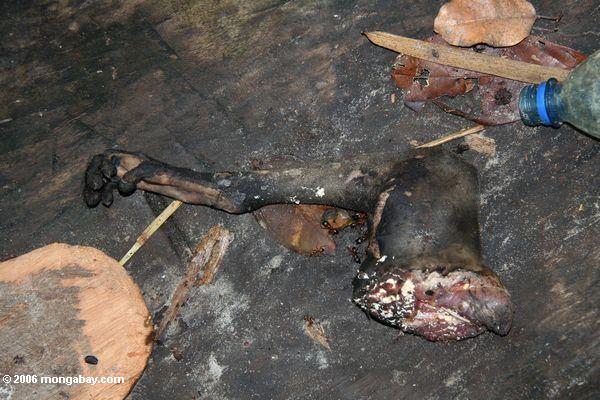 Severed monkey leg in the bottom of a canoe in Gabon. Photo by: Rhett A. Butler. Dried hedgehog in a Chinese market. Photo by: Rhett A. Butler.

Rhett D. Harrison. Emptying the Forest: Hunting and the
Extirpation of Wildlife from Tropical
Nature Reserves. BioScience 919. November 2011 / Vol. 61 No. 11.

(12/15/2011) Conservationists have often found that some cultural norms, religious beliefs, and taboos play a role in holding back traditional peoples from overusing their environment. Examples of such beliefs include days wherein one cannot hunt or fish, or certain species or regions that are off limits to exploitation. But the influence of the modern world can rapidly extinguish such beliefs, sometimes for the better, in other cases not. In many parts of Madagascar, lemurs are off the menu. These primates, found only in Madagascar, play a big role in Malagasy ‘fady’ or taboo-related folk stories: lemurs are protectors and, in some cases, even relatives. However, according to a new paper in PLoS ONE an influx of migrants, widespread poverty, lack domestic meat, and poor law enforcement has caused a sudden rise in eating lemurs, many of which are already near-extinction due to habitat loss.

(12/12/2011) Bushmeat hunting is one of the major threats to mammals in sub-Saharan Africa. Although widely discussed and recognized as an issues in Central and West Africa, a new study in mongabay.com’s open access journal Tropical Conservation Science describes a pattern of bushmeat hunting that is also occurring in southern Africa. Interviewing 114 locals living adjacent to Gonarezhou National Park in Zimbabwe, Edson Gandiwa with Wageningen University found that the primary drivers of illegal hunting in the park were bushmeat and personal consumption (68 percent).

(10/09/2011) Forest ranger, Zomedel Pierre Achille, was brutally murdered by gorilla poachers near Lobéké National Park in Cameroon, according to the World Wide Fund for Nature (WWF).

(06/27/2011) Bushmeat is one of the major threats to wildlife in parts of Africa: large and medium-sized animals are vanishing from regions in a trend dubbed by biologists the ’empty forest syndrome’. A number of popularly consumed species are also threatened with global extinction. A new study in mongabay.com’s open access journal Tropical Conservation Science surveyed 1,050 households in Brazzaville, the capital of Republic of the Congo, regarding their consumption of bushmeat only to find that the practice was practically universal: 88.3 percent of households in Brazzaville consumed bushmeat.

Bushmeat trade pushing species to the edge in Tanzania

(02/06/2011) Hunters are decimating species in the Uzungwa Scarp Forest Reserve, a part of the Eastern Arc Mountains in Southern Tanzania, according to a new report compiled by international and Tanzanian conservationists. Incorporating three research projects, the report finds that bushmeat hunting in conjunction with forest degradation imperils the ecology of the protected area.