More than 200 elephants have been slaughtered for their tusks in less than a month in Cameroon, reports the International Fund for Animal Welfare (IFAW). The group blames Sudanese poachers for cross-border raids from Chad into Bouba Ndjida National Park in northern Cameroon.

“The ivory is smuggled out of West and Central Africa for markets in Asia and Europe, and the money it raises funds arms purchases for use in regional conflicts, particularly ongoing unrest in Sudan and in the Central African Republic,” said IFAW’s Celine Sissler-Bienvenu, who added that the magnitude of the slaughter is unprecedented in recent years.

The killing represents a significant percentage of Cameroon’s remaining elephant population, which the IUCN estimates at 1,000-5,000.

Sissler-Bienvenu said the slaughter of elephants will only end once Asian demand for tusk ivory is killed. The high price of ivory makes the already difficult effort to protect elephants in Africa all the more challenging. 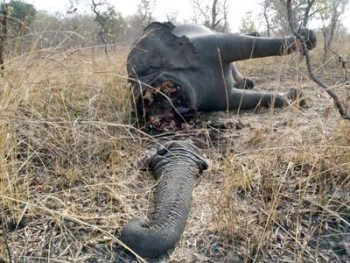 Widespread availability of high-caliber weapons due to civil conflict have led to an explosion in poaching in countries neighboring Sudan, putting both animals and wildlife rangers at risk.