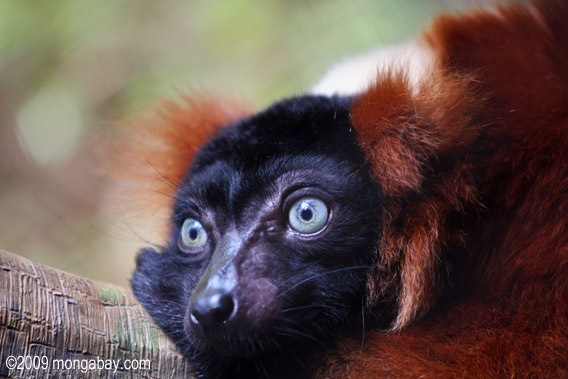 Red ruffed lemurs live in forest areas that were particularly hard hit by illegal logging in 2009 and 2010.

Confiscated timber stocks in Madagascar must be managed in a “transparent manner” to deter future illegal logging and boosting demand for endangered rainforest timber, says a letter published by a coalition of NGOs.

The letter, released today, is addressed to authorities in Madagascar as well as the World Bank, which is providing funds for environmental law enforcement, including a ban on ebony, rosewood, and palissander exports. Traders are currently sitting on large stockpiles of contraband timber that were amassed in the chaotic aftermath of a 2009 military coup when Madagascar’s rainforest parks were invaded by illegal loggers.

Disposing of the seized timber is now a key issue. Done right, funds from selling timber at auction could go toward forest protection and poverty alleviation efforts. Done wrong, sales of confiscated timber could enrich traffickers, boost demand for Madagascar’s rare hardwoods, and spur new logging. Thus the groups — the Environmental Investigation Agency, Global Witness, Zoo Zurich, the Missouri Botanical Garden, the St. Louis Zoo, the Field Museum, and the Madagascar Fauna Group — are calling for a careful and credible process for either destroying or auctioning the illicit timber.

“Stocks seized by the government must be managed in a transparent manner that deters future illegal activity (including harvesting from protected areas), does not benefit criminal actors in Madagascar or elsewhere, and does not generate renewed demand for the same product on international markets, with the consequence of continuing illegal trade in Malagasy precious wood,” they write.

“We are concerned by recent reports indicating that initial sales of confiscated rosewood stocks will not be carried out under transparent, third-party monitored conditions. Such sales risk benefiting those responsible for the illegal logging and would put international buyers at legal risk. We urge the government, involved international institutions and trading partner countries to study this issue very carefully before agreeing to any process for sale or immediate disposal of seized wood stocks.”

The letter commends Madagascar’s transition authority for the steps it has taken so far to limit precious wood trafficking, including reiterating a ban on timber harvesting and export, strengthening penalties for illegal activities, and listing nearly 90 tree species on the Appendix III of the Convention on International Trade in Endangered Species, which limits trade in protected species.

With high levels of unique species and a huge range of biodiversity, Madagascar is one of the world’s top conservation priorities. The island nation is most famous for its lemurs, a group of primates found mostly in forested areas.