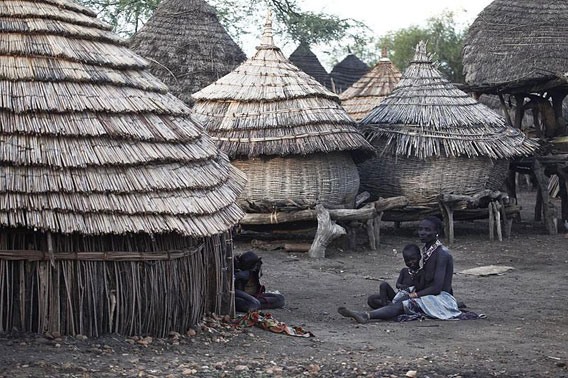 A village in South Sudan. Photo by: Steve Evans.

The Food and Agriculture Organization (FAO) and the World Food Program (WFP) have warned that South Sudan is facing a food crisis and that immediate action is needed to stave off a disaster. Currently 4.7 million people do not have enough to eat in South Sudan, while one million of these face severe food shortages. That number, however, could double if on-going conflict in the region continues and food prices continue rising, says the UN agencies.

“This is a rapidly approaching crisis that the world cannot afford to ignore,” Chris Nikoi, WFP’s country director in South Sudan, said in a press release. “The situation is dire, and we are doing everything we can to be ready, but we are running out of time.”

The crisis has largely been created by low rainfall, which has impacted much of East Africa, combined with regional conflict that has disrupted farming and transportation routes. Some climatologists have linked the recent droughts in East Africa to climate change.

In addition, food shortages have been exacerbated by increased demand, rising food prices, and people returning to South Sudan after it was declared an independent nation last summer.

The WFP, which aims to deliver food to 2.7 million people in the South Sudan, is working to raise $160 million.

Last year a famine killed thousands of people, including an estimated 30,000 children, in Somalia. A report released last month found that a delayed response to Somalia crisis cost thousands of lives.

“We all bear responsibility for this dangerous delay that cost lives in East Africa and need to learn the lessons of the late response,” Oxfam’s Chief Executive, Barbara Stocking, candidly stated in a press release. “It’s shocking that the poorest people are still bearing the brunt of a failure to respond swiftly and decisively. We know that acting early saves lives but collective risk aversion meant aid agencies were reluctant to spend money until they were certain there was a crisis.”