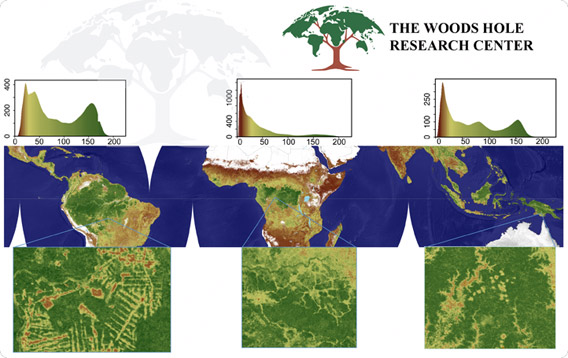 Tropical rainforests store some 229 billion tons of carbon in their vegetation — about 20 percent more than previously estimated — finds a new satellite-based assessment published in the journal Nature Climate Change. The findings could help improve the accuracy of reporting CO2 emissions reductions under the proposed REDD program, which aims to compensate tropical countries for cutting deforestation, forest degradation, and peatlands destruction.

The paper is based on a combination of remote sensing and field data across forests, woodlands, and savannas in tropical Africa, Asia, and South America. The authors used multi-sensor satellite data, including cloud-penetrating LiDAR, to reduce the degree of error in estimating carbon stocks. They found that Brazilian forests store some 53.2 billion tons of carbon, followed by forests in the Democratic Republic of the Congo, with 22 billion tons of carbon, and Indonesia, with 18.6 billion tons of carbon. Overall, forests in the Americas stored about 51 percent of the carbon locked up in tropical vegetation. Africa (28 percent) and Asia (20 percent) followed.

“For the first time we were able to derive accurate estimates of carbon densities using satellite LiDAR observations in places that have never been measured,” said study lead author Alessandro Baccini of the Woods Hole Research Center (WHRC). “This is like having a consistent, very dense pantropical forest inventory.”

The authors used the data to estimate that net emissions from deforestation from 2000 through 2010 amounted to 1.14 billion tons of carbon per year, suggesting that deforestation accounted for roughly 13 percent of greenhouse gas emissions from industrial sources between 2008 and 2010.

“The paper is important for two reasons,” said co-author and WHRC senior scientist Richard A. Houghton. “First, it provides a high-resolution map of aboveground biomass density for the world’s tropical forests. Previous maps were of much coarser resolution and yielded wildly different estimates of both regional totals and spatial distribution. Second, the paper calculates a new estimate of carbon emissions from land-use change in the tropics.”

Study co-author Scott Goetz, also a scientist at WHRC, added that a study of this nature could have not been done without technological advancements like LiDAR.

“Coupling the Lidar and field measurements is what makes this study and our map so unique, and powerful” he said in a statement. “Without measurements from a satellite-based Lidar, a study of this nature would not have been possible. We need that capability going forward.”

The carbon density data is freely available for download at www.whrc.org/mapping/pantropical/carbon_dataset.html. Satellite processing algorithms and data is posted on the Google Earth Engine.

(02/27/2008) Policymakers, conservationists and scientists have high hopes that REDD, a mechanism for compensating countries for reducing emissions from deforestation and forest degradation, will spur a massive flow of funds to tropical countries, helping preserve rainforests and delivering economic benefits to impoverished rural communities. To date, one of the biggest hurdles for the initiative has been establishing a baseline for deforestation rates — in order to compensate countries for “avoided deforestation” it first must be known how much forest the country has been losing on a historical basis. Until now, with some notable exceptions, this data was based largely on spotty satellite assessment and surveys of national forestry departments by the U.N. Food and Agricultural Organization.