Eco-toilets help save hippos and birds in Kenya 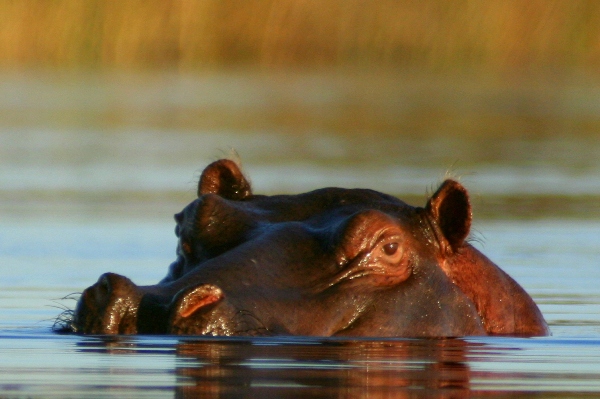 The common hippo (this one in Botswana) is considered Vulnerable to extinction. Photo by: Tiffany Roufs.

It may appear unintuitive that special toilets could benefit hippos and other wetland species, but the Center for Rural Empowerment and the Environment (CREE) has proven the unique benefits of new toilets in the Dunga Wetlands on Lake Victoria’s Kenyan side. By building ecologically-sanitary (eco-san) toilets, CREE has managed to alleviate some of the conflict that has cropped up between hippos and humans for space.

With extreme population and land pressures in the region, people have moved into the Dunga Wetlands to exploit its rich, though quickly exhaustible, soils for agriculture. However the resulting habitat loss has hurt many native species, besides the common hippopotamus (Hippopotamus amphibius), which is listed as Vulnerable by the IUCN Red List, the wetlands are also home to the sitatunga (Tragelaphus spekii) and the spotted-necked otter (Lutra maculicollis). In addition the Dunga Wetlands are listed as an International Bird Area (IBA), including sporting populations of the papyrus gonolek (Laniarius mufumbiri), listed as Near Threatened, and the papyrus yellow warbler (Chloropeta gracilirostris), listed as Vulnerable, and a number of other key African wetland birds. Eco-san toilets are being used to stem the destruction of further habitat.

The toilets collect and mix human waste with ash. After several months have passed the waste can be safely used as a fertilizer for crops, allowing the villagers to grow more crops without having to convert further wetlands. Furthermore eco-san toilets are also called “dry toilets” as they require no water to work.

But how easy is it to change one our most private habits: the way we use the toilet?

Mike Skuja, Executive Director at CREE told mongabay that “local communities have responded very favorably” to the new toilets and the program. Skuja attributes this to effective communication and local input.

“All projects are led by local people, and in Kenya for instance, our Project Manager has lived in the community his whole life. So our solutions to development come from respected leaders within the community itself, and thus have good support from the community because its not an idea imposed from the outside,” Skuja says. “The result is success, often with few financial resources, because it is an idea the community genuinely believes is best for them.”

While the area is home to abundant wildlife, Skuja said CREE did not consider eco-tourism a viable cure-all simply because it is “too fickle” and only provides “sporadic income.”

“[Eco-tourism] is dependent on the global economy,” says Skuja. “The crops are more regular. Eco-tourism is always touted as a solution to all socio-economic ills and it’s not, it’s a small part of a larger development package.”

According to its website, CREE “focuses solely on the relationship between poverty alleviation and environmental conservation as its principal concern and driving force.”

Skuja says that environmental protection and economic betterment of the world’s poor should not be seen as opposing goals, but that poverty often drives unsustainable use of local environments.

“To us the philosophical debate on whether the two [economy and environment] are at odds or hard to address simultaneously is irrelevant because if you don’t address livelihoods concerns at the ground level the environment will suffer. This is fact and not theory. Our challenge is to create realistic alternatives that communities can buy into and profit from while maintaining ecological sustainability. To do this we look not only to the economics but to whether an idea is feasible and culturally appropriate.”

(08/23/2011) Luangwa Valley in Zambia is home to stunning scenes of Africa wildlife: elephants, antelopes, zebra, buffalo, leopards, hyena, and lions all thrive in Luangwa’s protected areas, while the Luangwa River is known for multitude of snapping crocodiles and its superabundant herds of hippos. In fact, the area’s hippos were filmed for the BBC’s program Life, including a dramatic battle between two males (see below). Yet as in many such places in Africa, abundant plains and forest wildlife bump up against the needs of impoverished local people. The resulting conflict usually ends in large-scale wildlife declines; the same trend was documented in the Luangwa Valley until a unique initiative began to make a difference not only in the life of animals, but of people as well.

(06/16/2011) Income from forests and other ecosystem generates a significant proportion of household income in developing countries, finds a six-year survey of 8,000 families from 60 sites in 24 countries.