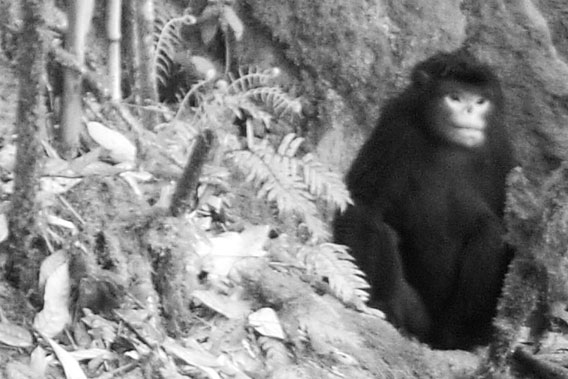 In 2010 researchers described a new species of primate that reportedly sneezes when it rains. Unfortunately, the new species was only known from a carcass killed by a local hunter. Now, however, remote camera traps have taken the first ever photo of the elusive, and likely very rare, Myanmar snub-nosed monkey (Rhinopithecus strykeri), known to locals as mey nwoah, or ‘monkey with an upturned face’. Locals say the monkeys are easy to locate when it rains, because the rain catches on their upturned noses causing them to sneeze.

“These images are the first record of the animal in its natural habitat,” said Ngwe Lwin, a native to Myanmar, who first recognized that the primate may be a new species. “It is great to finally have photographs because they show us something about how and where it actually lives.”

Still, no scientist has ever seen a living individual and the monkey’s life is obscured by the little-explored forests of northern Myanmar (also known as Burma). Just setting the camera traps in April of last year proved incredibly difficult with the expedition battling both snow and rain.

“We were dealing with very tough conditions in a remote and rugged area that contained perhaps fewer than 200 monkeys,” explains photographer Jeremy Holden, who led the team. “We didn’t know exactly where they lived, and had to rely on information gathered from hunters; I didn’t hold out much hope.”

Still a month after setting up the camera traps, the scientists had the first photographic evidence of a living Myanmar snub-nosed monkey, including family groups.

“We were very surprised to get these pictures,” said biologist Saw Soe Aung. “It was exciting to see that some of the females were carrying babies—a new generation of our rarest primate.”

Snub-nosed monkeys are imperiled by hunting and trapping, but it may be logging that ultimately does them in. In 2010 Frank Momberg, FFI’s Regional Program Development Coordinator in the Asia Pacific, told mongabay.com that hunting in the remote region had recently moved beyond subsistence only: with Chinese logging roads infiltrating the area there has been a rise in commercial bushmeat hunting. At the time, Momberg also warned that the logging roads were expected to move into Myanmar snub-nosed monkey territory by 2011.

Myanmar has one of world’s the highest deforestation rates, which is at least partly driven by China’s rising demand for commodities. Between 1990 and 2010, Myanmar lost 19 percent of its forest cover, or around 7,445,000 hectares, an area larger than Ireland.

Next month, FFI and Myanmar’s Ministry for Environmental Conservation and Forest (MOECAF) plan to meet to develop an action plan to protect the Myanmar snub-nosed monkey.

While the photos may not be award-winners, Holden says they bring to life the scarcity of the new primate.

“The images are poor quality compared to what we are now used to seeing from wildlife photographers, but this somehow examplifies the fact that these monkeys are rare, mysterious, and on the brink,” he says. 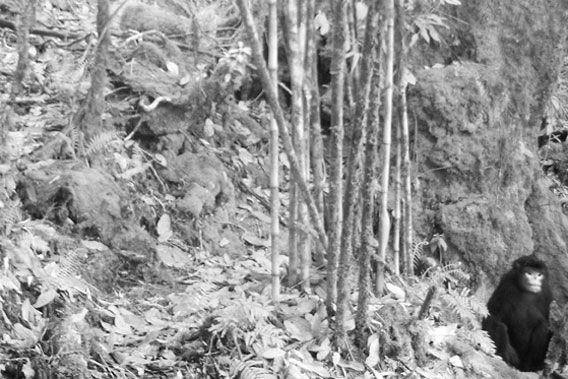 (10/26/2010) Hunters’ reports have led scientists to discover a new species of monkey in the northern forests of Myanmar. Discovered by biologists from the Myanmar Biodiversity and Nature Conservation Association with support from primatologists with Fauna & Flora International (FFI) and the People Resources and Biodiversity Foundation, the strange looking primate is a member of the snub-nosed monkey family, adding a fifth member to this unmistakably odd-looking group of Asian primates. However, the species survives in only a small single population, threatened by Chinese logging and hunting.