Already on the decline, demise of giant trees may be hastened by global warming.

Already on the decline worldwide, big trees face a dire future due to habitat fragmentation, selective harvesting by loggers, exotic invaders, and the effects of climate change, warns an article published this week in New Scientist magazine.

Reviewing research from forests around the world, William F. Laurance, an ecologist at James Cook University in Cairns, Australia, provides evidence of decline among the world’s “biggest and most magnificent” trees and details the range of threats they face. He says their demise will have substantial impacts on biodiversity and forest ecology, while worsening climate change.

“To persist, big trees need a safe place to live and long periods of stability,” he told mongabay.com via email. “But time and stability are becoming very rare commodities in our modern world.”

Giant trees offer critical habitat and forage for wildlife, while transpiring massive amounts of water through their leaves, contributing to local rainfall. Old trees also lock up massive amounts of carbon — in some forests they can account for up to a quarter of living biomass.

But their ability to sequester carbon and render other ecosystem services is threatened by human activities. Some of the world’s largest trees are particularly targeted by loggers. The oldest trees are among the most valuable and therefore the first to be cut in “virgin” forest areas.

Big trees are also sensitive to fragmentation, which exposes them to stronger winds and drier conditions. Laurance’s own work in the Amazon has shown substantial die-off of canopy giants in small forest fragments. Their susceptibility seems counter-intuitive given big trees’ life histories, which invariably include periods of drought and other stress.

“All around the tropics, big canopy and emergent trees are succumbing to strong droughts,” Laurance said. “That’s been a surprise to me and many other ecologists, because big, ancient trees would have had to survive many droughts in the past.”

“Trees are probably getting a double-whammy when the thermometer rises,’ says David Clark. “During the day, their photosynthesis shuts down when it gets too warm, and at night they consume more energy because their metabolic rate increases, much as a reptile’s would do when it gets warmer.” With less energy being produced in warmer years and more being consumed just to survive, there is less energy available for growth.

The Clarks’ hypothesis, if correct, means tropical forests could shrink over time. The largest, oldest trees would progressively die off and tend not to be replaced. Alarmingly, this might trigger a positive feedback that could destabilize the climate: as older trees die, forests would release some of their stored carbon into the atmosphere, prompting a vicious circle of further warming, forest shrinkage and carbon emissions.

Laurance notes climate change is having less direct impacts on forests, including creating conditions for exotic pathogens to thrive. For example, pathogens such as Dutch Elm Disease, introduced by trade or circumstance, can devastate native forests.

All told, the outlook for big trees is not good, according to Laurance.

“The decline of big trees foretells a different world where ancient behemoths are replaced by short-lived pioneers and generalists that can grow anywhere, where forests store less carbon and sustain fewer dependent animals, where giant cathedral-like crowns become a thing of the past.” 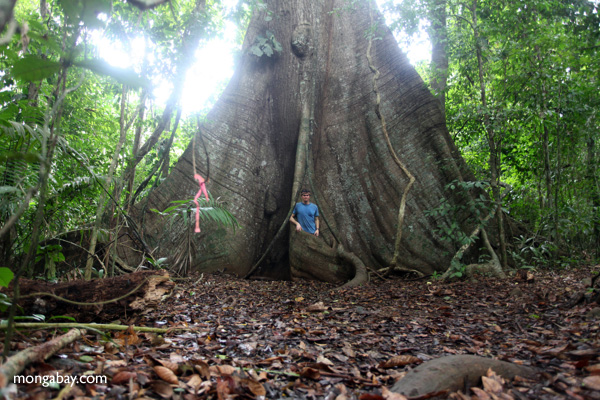 (10/17/2011) Aged, living trees are essential for over 1,000 birds and mammals that depend on such trees for nesting holes, according to a study in Frontiers in Ecology and the Environment. In much of the world, tree-nesting animals depend on holes formed through maturity and decay—and not woodpeckers—requiring standing old trees.

(09/14/2011) Old growth rainforests should be a top conservation priority when it comes to protecting wildlife, reports a new comprehensive assessment published in the journal Nature. The research examined 138 scientific studies across 28 tropical countries. It found consistently that biodiversity level were substantially lower in disturbed forests.