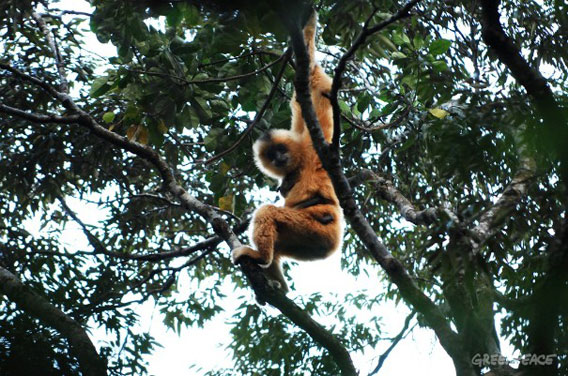 One of the very last Hainan gibbons (Nomascus hainanus), this one is a female. Photo courtesy of: Greenpeace.

Just twenty-three Hainan gibbons (Nomascus hainanus) survive in the world. Confined to a single protected area on a lone island, Hainan gibbons are losing their habitat at a steady rate of 20 hectares per day finds a new study by Greenpeace. In all, nearly a quarter of the Critically Endangered lesser ape’s habitat has been lost since 2001.

Researchers employed satellite imagery and field work to document illegal forest destruction on the island, largely for pulp and paper plantations. Although there are laws against such forest destruction, they are not enforced.

“This illegal deforestation comes in response to market demand and disrespect for nature,” Yi Lan, forests campaigner with Greenpeace, said in a press release. “In this case, the local government has the ability to stop the rainforests and the gibbons from disappearing from Hainan.”

There are no Hainan gibbons in captivity. Once widespread across Hainan Island, the nearly two dozen gibbons surviving today are found only in the
Bawangling Nature Reserve on the island’s western side. Just over fifty years ago—before the forests were logged and turned into plantations—scientists believe there were likely 2,000 Hainan gibbons.

Gibbons are known as ‘lesser apes’. A branch of the ape family, gibbons do not have a tail like other ape species, such as gorilla, chimps, orangutans, and ourselves. However, they do share some characteristics, as well, with monkeys. Gibbons almost never touch the ground, instead they forage high in the canopy moving gracefully and incredibly quickly between trees.

(11/30/2011) Two Hoolock gibbons have been successfully translocated from a fragmented forest to Mehao Wildlife Sanctuary in the beginning of a desperate bid to save 18 family groups of India’s last apes. Living near the village of Dello in northeastern India, the apes were straining to survive amid heavy deforestation and fragmentation.

(11/30/2011) One doesn’t have to be a scientist or a government official to help save the world’s vanishing rainforests, one can also be a chef. World-renowned chef Andre Chiang has added a new item to his menu called Orangutan Salad, reports the Wall Street Journal, which he hopes will raise awareness for the endangered apes at his Singapore eatery, Restaurant Andre. The new salad gives restaurant-goers the chance to enjoy all the subtle, earthy tastes of a typical orangutan meal, including ferns, tree fungi, figs, berries, orchid leaves, and durian flowers.

Entertainment media skews public perception of chimpanzees in the wild

(11/14/2011) You’ve probably seen them: the TV ads showing chimpanzees wearing suits, driving cars, or smoking cigars. These ads may tickle our funny bone, but they warp our perceptions of how chimpanzees are faring in the wild, researchers at Duke University have found. The study, published October 12 in the journal PLoS ONE, examined whether watching commercials featuring chimpanzees influenced people’s understanding of their endangered status.