Bare hills: aerial view of deforestation and soil erosion in Madagascar. Photo by: Rhett A. Butler.

In terms of biodiversity, the hugely imperiled forests of Madagascar may be among the world’s richest. Researchers estimate that the island off the coast of Africa is home to at least 10,000 tree and shrub species with over 90 percent of them found no-where else in the world. With little baseline data collected on Madagascar’s ecosystems, a new study, the first ever of tree diversity in Madagascar lowland rainforests, hopes to begin the process. Published in mongabay.com’s open access journal Tropical Conservation Science, the new study surveyed tree species in eastern Madagascar’s Betampona Special Reserve.

In all researchers counted 244 tree and shrub species in 49 different families over a hundred different plots spanning a total of 0.79 hectares. This is among the highest worldwide. In fact, only a similar study in Yanomamo, Peru found more species: 292 over one hectare. But Malagasy diversity bested similar studies of lowland rainforests in Malaysia, Indonesia, Columbia, Cameroon, and Papua New Guinea (see graph below).

Not only is Madagascar’s rainforest highly-diverse, but it is also unique compared to the world’s other rainforests.

“The eastern lowland rainforests of Madagascar have also been noted for their unique richness of palm (Arecaceae), pandan (Pandanaceae), bamboo (Graminaceae) and tree-fern species (Cyatheaceae),” the authors write. Euphorbiaceae, or the Spurge family, was the most dominant tree in the forest.

“With levels of biodiversity that are among the highest worldwide, the island is in many ways on the verge of ecological collapse,” the authors write. The rainforests of Madagascar are almost entirely gone: only 10 percent of the island’s primary forests still survive.

Fueled by poverty, overpopulation, poor governance, and slash-and-burn agriculture most of Madagascar’s forests are either gone or highly imperiled. A recent logging crisis even lead to illegal logging across many of Madagascar’s protected areas. Forest loss in the country not only threatens the island’s unique species, but also worsens living conditions for the Malagasy people, who now face drastic erosion, soil degradation, overexploitation of resources, and alien species.

“Given the rapid rate at which the lowland rainforests in particular are being fragmented and consumed, it is projected that there will be no primary forest left outside of protected reserves by the year 2020,” the authors write. “However, this may become a reality sooner as the anthropogenic pressure on the flora and fauna as well as on the resources that sustain them has been been on the rise due to lack of conservation enforcement since the government coup in early 2009.”

Some experts have warned that Madagascar could become the next Haiti in terms of deforestation and wholesale ecological collapse, worsening the lives of the country’s mostly poor resident and destroying some of the world’s richest habitats. 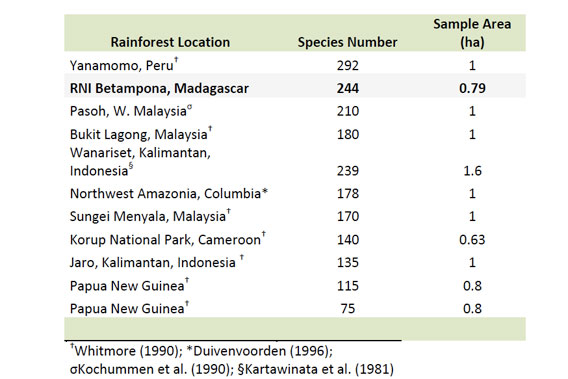