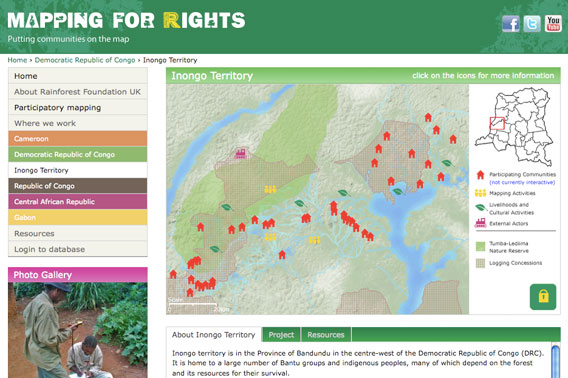 A new initiative to place community mapping of central African rainforests online could prove key to local rights in the region, says the UK-based NGO Rainforest Foundation. Working with forest communities in five African countries, Rainforest Foundation has helped create digital maps of local forests, including use areas, parks, and threats such as logging and mining. The website, MappingForRights.org, includes interactive maps, photos, and video.

“It is now widely understood that helping indigenous peoples and other local communities to protect their land is one of the best and cheapest ways to conserve tropical rainforests. But the problem is that there are often no records even of where these communities are, or of which areas of forest they use or wish to protect,” explains Simon Counsell, director of the Rainforest Foundation.

The website is working to change this in the Central African Republic, the Republic of Congo, Cameroon, Democratic Republic of Congo, and Gabon. The initiative has been released in conjunction with the 17th UN Summit on Climate Change where officials are likely to move forward on the REDD program (Reduced Emissions from Deforestation and Degradation). Meant to preserve forests for their carbon sequestration potential, REDD faces a major issue in community rights.

“Without a clear basis for understanding and recording who owns or occupies rainforests, REDD is very likely to fail, as it will be very hard to target forest protection payments to the right people. MappingforRights.org shows that, whilst reliable mapping of forest use and ownership requires detailed on-the-ground work with communities, often under very difficult conditions, it is perfectly possible to do so at reasonable cost and scale,” Counsell says. He recommends to the program that it makes “scaling up community-based mapping of forests […] a top priority.”

“Most of the rainforests of Africa are inhabited by local communities, some of which have been present in the forests for thousands of years, though mostly still lack any formal legal ownership rights,” says Georges-Thierry Handja, mapping advisor for the Rainforest Foundation. “The [initiative] is already starting to show graphically how the areas of forest on which these communities depend have been handed out arbitrarily to logging companies, or put off-limits in National Parks or other strict conservation areas.”

The new site brings together 10 years of mapping work by Rainforest Foundation and other groups in the region, and could be an example for other parts of the world where marginalized forest communities are seeking recognition.