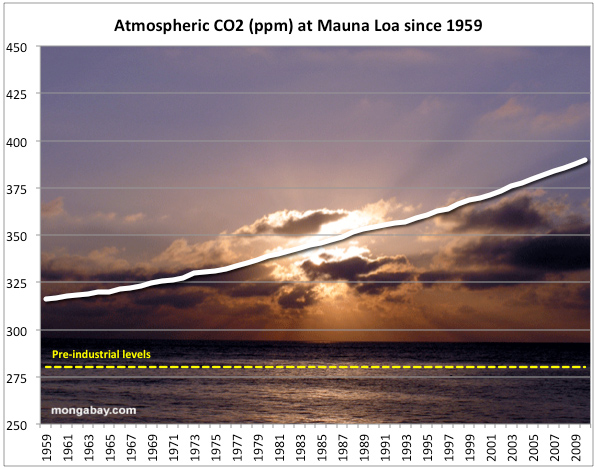 The concentration of greenhouse gases in the atmosphere hit a new record in 2010, according to the UN’s World Meteorological Organization (WMO), which found that warming from greenhouse gases rose 29 percent from 1990 to 2010. The announcement was made just a few days prior to officials meet at the 17th Climate Conference in Durban, South Africa, where expectations are low for a strong, binding agreement with a number of wealthy nations stating they expect no new agreement to take affect until 2020.

“The atmospheric burden of greenhouse gases due to human activities has yet again reached record levels since pre-industrial time,” WMO Secretary-General Michel Jarraud said in a statement. “Even if we managed to halt our greenhouse gas emissions today—and this is far from the case—they would continue to linger in the atmosphere for decades to come and so continue to affect the delicate balance of our living planet and our climate.”

Rather than the rise of carbon slowing down, the WMO report found that the concentration of carbon was accelerating. The atmospheric abundance of carbon rose by 2.3 parts per million last year, while the average for the 1990s was 1.5 parts per million. Carbon, methane, and nitrous oxide has all hit record levels.

To date, international efforts to rein in greenhouse gas emissions have been slow, modest, and haphazard. After what was perceived as largely a failure at the Copenhagen climate summit in 2009, nations have been mostly deadlocked in crafting a global agreement to stem climate change. The up-coming efforts in Durban are not expected to change this trend.

Wealthy countries, including the US and the UK, have recently stated they expect an international treaty to be pushed off until 2020. However, a recent study found that in order for nations to hold to their pledge of keeping temperatures from rising above 2 degrees Celsius emissions would need to start dropping significantly by 2020.

Poor and vulnerable nations, frustrated by the lack of progress in the talks, are mulling a call by former Costa Rican president Jose Maria Figueres to “occupy Durban”, a reference to the Occupy Wall Street movement that has swept the US and parts of the world. A website devoted to this idea reads in part: “Private corporations are occupying our seats in the UN climate talks and governments corrupted by corporate influence are claiming to represent our needs. They are abusing and pillaging the consensus process, once put in place to ensure even the smallest and most vulnerable had a say.”

Todd Stern, climate envoy for the US, however argues that significant progress has been made and non-binding agreements “sets what we’re doing between now and 2020.”

Scientists for decades have been making the case that the world is getting warmer due to greenhouse gas emissions from burning fossil fuels, as well as deforestation and agricultural practices. Global climate change has been linked to melting of the Arctic, global sea level rise, increased droughts and floods, worsening extreme weather, and desertification. Future impacts include increased global conflict, refugees, famine, and mass extinction.

(11/06/2011) Global greenhouse gas emissions last year exceeded worst-case scenario predictions from just four years before, according to the US Department of Energy (DOE). A rise of 6 percent (564 million additional tons) over 2009 levels was largely driven by three nations: the US, India, and China. Emissions from burning coal jumped 8 percent overall. The new data, supported by a similar report from International Energy Agency (IEA), make it even more difficult for nations to make good on a previous pledge to hold back the world from warming over 2 degrees Celsius.